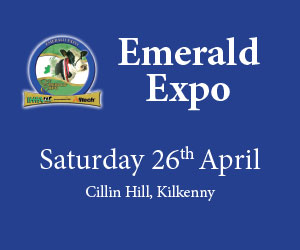 Emerald Expo Judge Nico Bonns described the line-up of animals presented before him at Emerald Expo Saturday as the best selection of dairy stock that he had ever seen.

“The five cows taking part in the Championship class would have more than held their own at any event held in Europe. The calibre of Holstein breeding stock in Ireland is immense and the sooner that Irish breeders re-commit to taking part in Europe’s top dairy shows the better.”

These thoughts were echoed by the IHFA’s new President Tom Murphy. “The standards being achieved by pedigree dairy cattle breeders in Ireland continues to improve. IHFA members are role models for the rest of the industry. Commercial dairy farmers can be re-assured that the quality of the breeding stock they ned to expand their businesses beyond 2015 is available to them in this country.’

The Emerald Expo Supreme Champion for 2014 is Laurelmore Duplex Impala, bred and exhibited by the Barrett family, from Togher in Co Cork. Born in 2007, she was sired by the renowned Holstein bull  Mesland Duplex. “She calved for the fourth time last September and is currently giving 47 litres of milk per day,” Johnny Barrett told Agriland.

“Our aim is to take her to a number of the local shows around Cork over the summer months. She is due to calve again in September. And if all goes well we will take her to Balmoral Winter Fair in Belfast before Christmas. “Impala had had a very successful show career to date and we would like to build on this for the future.”

Judge Nico Bonns described Impala as the perfect cow. “She has tremendous confirmation, excellent feet and legs plus a truly elite mammary system,” he explained. “It’s hard to find a fault in her.”

The Emerald Expo runner up was Glaslough Miss Petra, bred and exhibited by the Boyd family from Co Monaghan. A daughter of Mr Minister she, too, looked an absolute picture in the ring.

The next key event in Ireland’s pedigree events’ calendar is Balmoral Show. This year’s three day spectacular takes place between Wednesday May 14th and Friday May 16th at its new home on the outskirts of Lisburn.