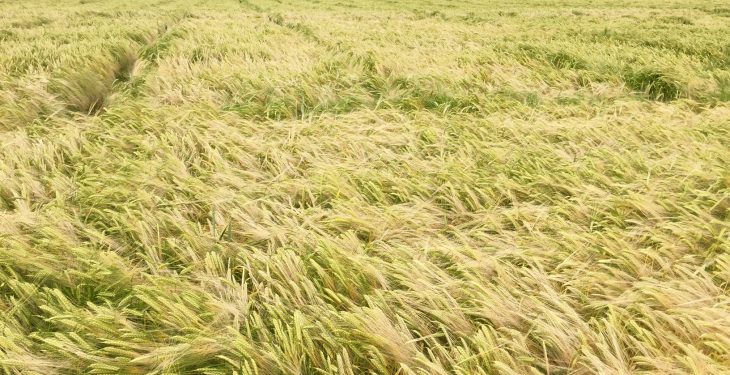 However, late-sown spring barley is not looking as good as the earlier sown crops, he said.

He also said that US yields are expected to be excellent, which all leads to downward pressure on tillage farmers here.

Wheat and oat crops remain reasonably clean from disease where good programmes were used, while barley crops are senescing down, lodging is becoming an increasing problem with all the wet weather.

On the disease front, yellow rust and mildew are reported in spring wheat and oats respectively, but spring barley is generally free from disease; however BYDV symptoms are common in most late sown crops.

Teagasc has advised that grass weeds such as Wild Oats, Sterile Brome and Canary Grass are very visible this year.

It has also confirmed the presence of Black Grass in areas where this weed was previously unknown.

Septoria levels remain low but the benefits of disease control programs are obvious in unsprayed corners or trial plots, according to Teagasc. It says that aphid numbers appear to be low at the moment, and advises to only apply a systemic aphicide if more than 5 aphids are found per head.

Winter barley is at the senesce stage with the harvest expected to begin within two to three weeks, according to Teagasc. While lodging is common in most crops at this stage, it advises to put measures in place to prevent birds feeding in the crops. Yield predictions are mixed but generally lower yields than last year are expected.

While most winter oat crops are relatively free from disease, Teagasc says that mildew became problematic in some areas after heading but was too late to cause significant losses.

It also says that lodging is also common in crops, mainly in areas of excess nitrogen.

The recent wet/warmer weather conditions have greatly helped crop growth and barley crops are from awns emerging to mid grain fill, while wheat and oat crops are at a similar stage.

BYDV symptoms are common in most of the later sown crops. Disease levels remain low but mildew is common on oats and wheat with some yellow rust reported in wheat in the south east.