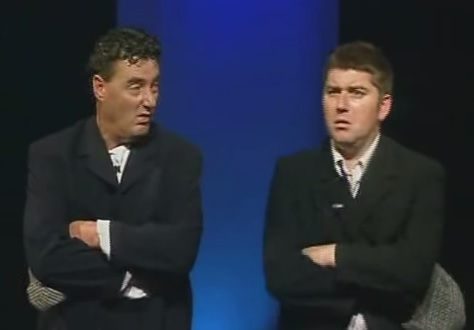 Pat Shortt and John Kenny’s exploits in their collection of D’Unbelievables movies are much loved in the farming community.

Agriland has complied a selection of the best clips from over the years which involve farmers.

Including classic quotes such as – “Rosie Murphy has him down for a tonne”, “Oh he’s well fed” and “Will that young fella get away from Pa Scallon. I’ll beaat ya”.

Ricky Whitelaw show – Another classic clip from the duo. We defy anybody to watch this and not bust into uncontrollable laughter.

Featuring unforgettable lines such as- “She was a stripper,” “Well ya see Larry had a lorry,” and “The factory is not the answer”, it tells the tale of one man’s struggle with a cross cow in his life.

A simple owl salad – Finally, probably one of the classic moments from the D’Unbelievables fifth instalment D’mother. Dan tells the tale of how one misfortunate farmer met his end at the hands of the “bastards”.

Featuring many classic quotes such as “There was more people killed in that field abroad than was ever killed in India”, “Mother of god when I think of what they did to that man” and “they were sitting down there minding their own business” before we get to the nitty gritty of being shot up against the wall in the middl of a field…we’ll let you watch it now and enjoy!

If you can think of some more classic farmer moments from the D’unbeliviables be sure to let us know.

Video: Amazing footage of silage being cut in Ireland