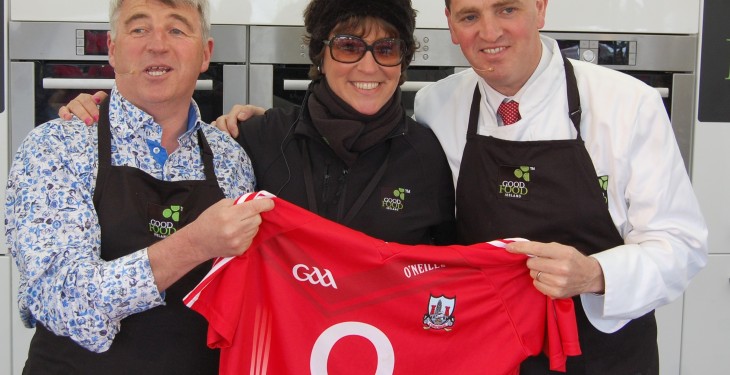 Ten thousand visitors from every county in Ireland made their way to Day 3 of the Golden Shears World Sheep Shearing Championships in Gorey. And with the Sheep Dome packed to capacity throughout the day, the atmosphere at the event has been truly electric.

Before end of play today, 1,600 sheep – mostly Texel, Suffolk hoggets – will have received a short back and sides. And not one drop of blood will have been shed in the process.

The day got off to a tremendous start for Co Mayo’s David Kane, who won the FBD: Irish Country Meats Young Shearer of the Year competition. He will now represent Ireland in the European Championships, planned for France in September.

Food and the quality of the produce from local farms is a key theme to the Shearing Championships. Good Food Ireland Managing Director Margaret Jeffares told Agriland that the Golden Shears Event has provided a unique opportunity for many of this country’s fast developing food businesses to showcase their wares.

“We were launched in 2007 as a vehicle to promote the quality of the food produced on the island of Ireland,” she commented

“In tandem with the Irish Tourist Board we have succeeded in profiling the combined tourism and eating experience that is so synonymous with Ireland. Our job is to brand Ireland as a centre of food excellence.  In so doing we are helping to create a marketing platform for those thousands of Irish food companies now exporting to countries around the world.

“Our sheep industry has a tremendously positive story to tell,” he confirmed to Agriland.”

The Minister was taking part in a cook off on the Good Food Ireland stand at today’s Golden Shears’ event with celebrity chef Martin Shanahan. He continued:

“The sheep industry plays a crucially important role at the very heart of Irish agriculture. It supports thousands of jobs in the meat processing sector and I am delighted that so many consumers the world over are now opting to choose Irish lamb!”