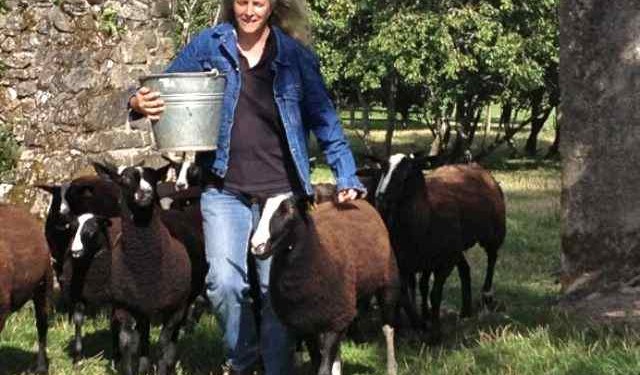 This week’s farmer of the tweet is: Suzanna Crampton of south Kilkenny

Suzanna farms a small farm of 50 acres in South Kilkenny which has been in her family for seven generations. She did her lambing apprenticeship on two different farms in Ireland in Wicklow and Carlow in the early Eighties. Soon after she left Ireland for work abroad but came back to Ireland in 1997.

Getting involved with Zwartbles sheep

Suzanna explained: “A friend and neighbour once said to me that I should get involved in a rare breed or pedigree sheep rather then a commercial flock, as I hadn’t the land to make a sustainable living from them. So I went to the Ploughing Championships when they were held just up the road in Burnchurch and spotted these unique chic looking sheep. I bought three hoggets and one pregnant ewe from Ray Sweeny of Ardee. As luck would have it two of the hoggets happened to be in lamb so doubled my flock at half the price in no time. Zwartbles wool is a soft rich dark chocolate brown with sun bleached creamy tips.”

There is a Facebook page Zwartbles Ireland, Pinterest, You Tube channel where Zwartbles videos can be viewed, and a Twitter account @zwartblesie. “To date I have more than 3,000 followers on Twitter and some 949 on Facebook, not bad for a flock of black sheep munching in some small Irish green fields. My followers seem to be from all over the world, Japan to Texas, Canada to Argentina, South Africa to Kuwait, also many Irish, even knitters and spinners from this sheep’s homeland in the Netherlands. Quite a few of them are waiting for the wool to be processed into knitting yarn, blankets and travel rugs.”

Suzanna via Social Media plays host to a group of six women sheep farmers who came all the way from Norway to visit her flock having seen them on Facebook. “I am going to meet up with 20 Australian farmers who are visiting Ireland and the UK touring farms. We all connected via Twitter and I’m looking forward to meeting them all this coming 1 September. There are many Irish farmers and other non-farming people I have met via Twitter and so far have made loads of new friends.