A third man has been arrested by investigating Gardaí in connection to an attempted ATM robbery in Virginia, Co. Cavan, An Garda Síochána has confirmed.

Gardaí investigating the incident, which took place this morning, Wednesday, August 14, arrested the man in Virginia.

He is currently detained in Bailieboro Garda Station under the provisions of Section 50 – Criminal Justice Act 2007.

The two men arrested earlier are detained at Carrickmacross and Kells Garda Stations.

Advertisement
In a follow-up operation in the Co. Meath area a “substantial amount of cash” was recovered, according to a Garda representative, who added that the quantity of this is yet to be confirmed.

Further searches are continuing this afternoon.

In the early hours of this morning, uniform and plain-clothes Gardaí, attached to Cavan/Monaghan Garda divisions, and supported by Garda National Units, intervened in the attempted robbery of the ATM, which involved an excavator.

This morning’s incident is the latest in a series of ATM robberies that have taken place in 2019 in Northern Ireland and the border region of the republic.

These incidents often saw criminals using excavators to pull ATMs out of walls, before making off in another vehicle.

The crimes prompted a number of warnings to owners of heavy machinery from An Garda Síochána and the Police Service of Northern Ireland (PSNI) in recent months. 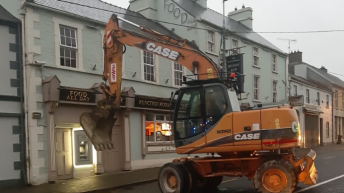