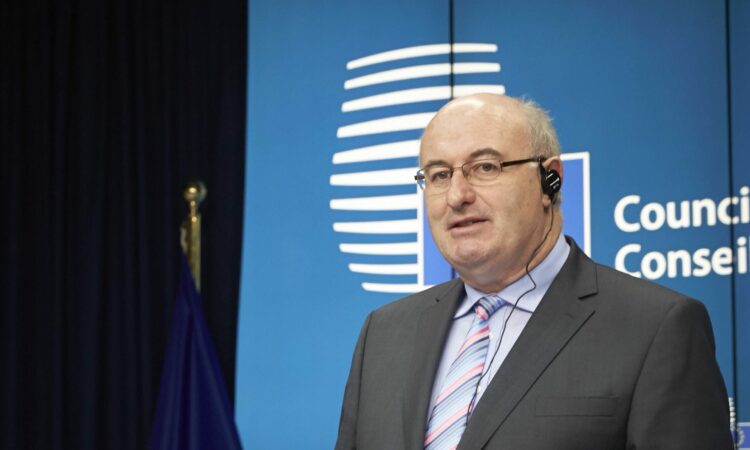 The European Commissioner for Agriculture, Phil Hogan, is dealing with the ongoing dairy crisis on an ad hoc basis, according to Sinn Fein MEP Matt Carthy.

Carthy, who is a member of the Agriculture Committee on the European Parliament, said that the Commissioner is failing to recognise the deteriorating nature of a sector in trouble.

“Last week the Commission announced that it was looking at increasing the ceiling for buying-in of skimmed milk powder to 350,000t, which is more than triple the initial offering, just five months into this year.

“The Commission had not envisaged reaching this ceiling until September 20, 2016.

“This figure stands in stark contrast to the mere 40,000t that was offered into EU intervention for the entire year of 2015.”

We are a million miles away from the pronouncements in advance of the abolition of quotas when the commission, the Irish government, banks and processors were predicting sustained growth for the sector and encouraging farmers to invest heavily on that basis.

“It is those farmers who took that advice who are now in the deepest trouble,” Carthy said.

The Sinn Fein MEP said that the Commission continuously refers to a number of ‘temporary’ measures being used to alleviate this crisis, however, when he asked what indicators were being used to determine when those measures would lapse, or what conditions would have to be present for them to be extended, Carthy said that the Commission has completely failed to answer.

“This shows a Commissioner attempting to deal with the crisis on an ad hoc basis, effectively hoping that the situation will resolve itself with the passing of the summer season.”

Carthy said that in addition, the Commissioner is refusing to cooperate to find a solution to the postponement of the superlevy fine for 2016.

“The payment of these fines is causing serious cash flow issues for dairy farmers already struggling to make ends meet.

“Despite Ireland recently calling for the postponement of the superlevy fine for 2016 and the IFA reporting that the average superlevy fine still outstanding is in the range of €10,000 per dairy farm, Commissioner Hogan provides a pitiful excuse that as the legal basis for the regulations underpinning the scheme are no longer in existence, it is not possible to implement this suspension.”

Carthy has said that both of these scenarios show the complete inadequacy of the Commissioner’s response thus far to a crisis that shows no signs of improvement, as well as unwillingness to acknowledge the depth of the problem.