‘The aim of the game was to prioritise cow comfort’

Tucked away in the south-east corner of Kildare, Ger Waters and his sons, John and Alex, have grown their herd steadily over the last number of years.

The Waters family has farmed this land since 1921. Ger is the third generation to do so while John and Alex are the fourth generation to preside over the Crookstown holding.

In 1986, Ger started out with a herd of 20 cows. He continued to grow this number throughout the years and in 2015 his herd size stood at 180 head. Then came the abolition of milk quotas.

Ger, like many Irish farmers, saw this as the ideal time for expansion and began to grow the herd again, arriving at today’s headcount of 330 cows. Within this number they have 130 autumn calvers, 200 spring calvers while they keep 70 bullocks each year.

It makes for a busy operation but help wasn’t far away. Ger explained: “The increase in our herd size coincided nicely with John and Alex’s time in college really.

“John was just finishing his degree in Science in Agriculture in Waterford Institute of Technology while Alex was just about to start the same course. John moved back home full-time and Alex came home at the weekends so we were able to share out the workload; they were able to bring some new tips and tricks too.” 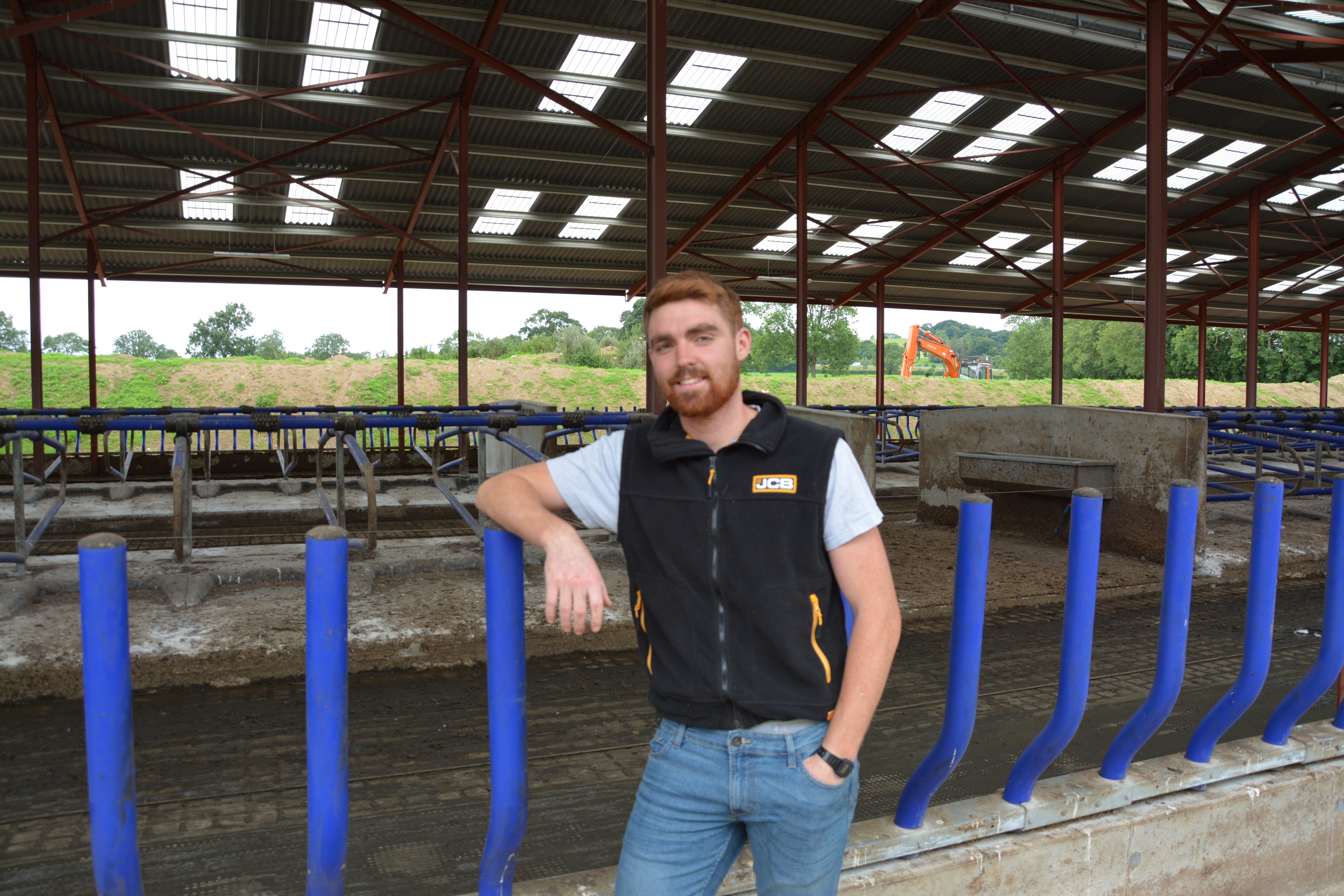 With a herd size that was larger than ever, the original sheds and processes that the Waters family had in place began to come under pressure.

While the family could avail of housing groups of cows in several out-farms it made the logistics of the operation much tougher. Milking and feeding became hugely labour intensive and with more cattle vying for their own position in the queue injuries began to creep in too.

A new shed was always on the cards but we tried to maximise the existing facilities we had on the farm as much as we could. It was tough. The cows would have to be buffer-fed on rotation; we’d bring half the cows in, feed them, let them out and then let the next group in.

“It meant there was a big rush to feed and many cows injured themselves by rushing up the passage and clipping the ends of the old steel cubicles or being shoved into the steel feed rail. In particular, the cows’ hips and ribs were suffering from these bangs.

“We have very big cows and it’s important that they have lots of room to lie, lunge and just move about in general. They didn’t have that space anymore and they were becoming stressed…so were we!”

In 2018, Ger, John and Alex agreed that it was the right time to start looking at building a new shed. They visited a few sheds locally to get a feel for what dimensions the shed would need to be. In the end they opted for a 2,100m², 11-bay shed, with 10m high roof pitch in the centre.

The concrete work was done by Tommy Guing and Sons while the shed was supplied and erected by O’Dwyer Steel. Their next task was to solve their cow comfort conundrum. 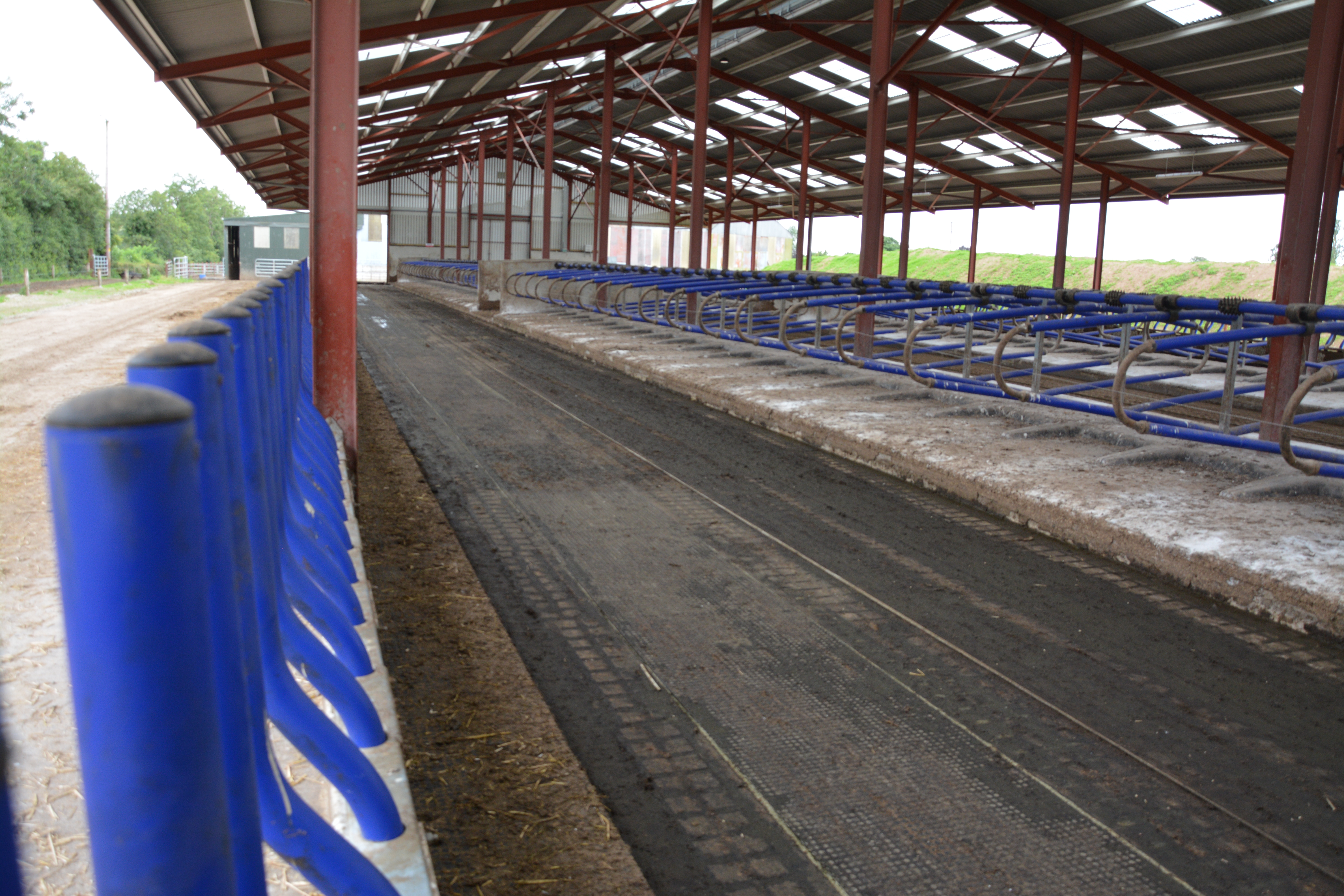 Having originally spotted EASYFIX at the National Ploughing Championships, Ger and his sons had admired the plastic cubicle option for a while.

They did their research online and in particular studied the more progressive indoor European farms as they knew that they would be feeding all year round, in some capacity or another. They found that many of these farms seemed to be opting for plastic cubicles and, in particular, EASYFIX.

Above all else we needed comfort and space so EASYFIX was always our number one choice.

“We spoke with EASYFIX and Iggy called out to advise us on the best products to suit our needs as well as some tips for how comfort solutions would work best in a new build. For example; creating specific hollowed-out compartments at the feed rail for rubber to sit flush into. This was great insight to get.

“We were interested in a number of EASYFIX products so Iggy brought us to several farms to see them in action and to speak with the farmers about their experience with them. We were very impressed with what they all had to say,” remarked John.

To optimise their herd’s comfort, the Waters family selected a variety of EASYFIX products. As they remarked, they have a bigger bodied cow and so chose 192 EASYFIX ‘Calm’ cubicles that flex to the animal’s body shape so that she doesn’t feel any undue pressure on her sides.

They coupled this with the EASYFIX ‘Neptune’ mattress which incorporates a 50mm layer of foam for added comfort and comes wrapped in a 500-micron sealed wrapper which repels urine and other fluids.

For added comfort, they have recessed EASYFIX ‘Action’ matting at two locations inside the feed rail for the cows’ front and back feet as well as at all three cross-over points.

“The difference I can see in the cows since moving into the new shed is huge. They’re much more confident lying down and standing up because the EASYFIX cubicle is much more forgiving than the old steel cubicles,” Ger noted.

“They’re a much more relaxed herd now – they lounge around, fill the shed much more evenly and you’d even see some of them fast asleep. That probably has something to do with the installation of the Evolve feed rail too.

“Feed intakes are up by between 8% and 10% thanks to the Evolve. The cows can reach the feed much easier and can stand in comfort without obstruction when chewing.

The increased feed intakes and lying times help the cows to produce as much milk as possible. We’ve seen a 10% jump in milk solids and a 2L/cow/day milk yield increase already.

“They’re much more confident walking on the rubber and they head away for milking much quicker and calmer. We’ve seen the bulling cows congregate on the Action mats at the cross-overs which is great too.”

The project has been a huge success for the Waters family. The cows now enjoy much more space so they can relax, eat and socialise in comfort. It’s been a seamless transition for Ger, John and Alex too making their workload easier so they can plan for the continued growth and success of the enterprise.

Summing the project up, John concluded: “From the very start of the project the aim of the game was to prioritise cow comfort and we have definitely achieved that.”