The Irish Cattle Breeding Federation (ICBF) has compiled a list of the 10 most frequently asked questions relating to the Beef Data and Genomics Programme.

Among the questions asked are do the €uro-Star indexes work and what’s new compared to the 2014 scheme.

Questions about the €uro-Star rating of cows and where farmers can find this out are also answered by the ICBF.

The benefits in getting involved in the beef genomics scheme from a pedigree beef breeding perspective are explained by the ICBF.

Yes. Work by ICBF and Teagasc has clearly demonstrated the link between the €uro-Star replacement index and maternal female performance.

The objective of the index is to identify animals that will have good milk and fertility and with a good calf at foot. Latest analysis of data from the Teagasc Grange Maternal herd (some 109 animals, selected based on €uro-Star replacement index in Autumn 2012), indicates that, using that index, the high genetic merit animals are clearly more profitable than their low genetic merit contemporaries, based on completed first lactation performance (Table 1).

The short summary of the data from Table 1 indicates that selecting animals in Autumn 2012 based on their €uro Star replacement index has resulted in cows that calve earlier, are lighter at calving, but yet rear a heavier calf.

These are exactly the sort of attributes that we want to see in our suckler cow.

The objectives of the scheme is to increase the average €uro-Star replacement index of herds through the introduction of more 4 & 5 star animals (bulls and cows) in scheme herds.

Again, work by ICBF and Teagasc has clearly shown the direct relationship between increasing herd replacement index and key industry metrics such as calves/cow/year and suckler cow profitability (Figure 1). This analysis was based on some 24k herds that were in the 2014 program that had 10 or more calvings in 2014. 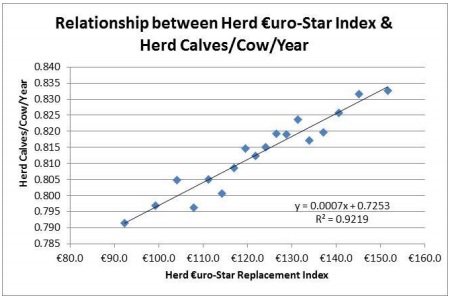 Analysis of that dataset has indicated that moving herds in the scheme from €120 on herd replacement index (i.e., 38% 4 & 5 star females, the average for the dataset) to €145 on herd replacement index (i.e., 57% 4 & 5 star females), will result in calves/cow/year increasing from 0.81 to 0.83, resulting in another 3 weanlings being generated on scheme farms during the course of the program (on an average 20 cow farm). [colored_box color="green"]Cumulatively this is worth some €1200 at the farm level, or some €35m for all herds involved in the scheme.[/colored_box]

Of course, participants should be reminded that the benefits of improved genetics won’t simply stop once the scheme finishes in 2020, and on that basis the Department of Agriculture and ICBF are confident that benefits of the scheme will continue to accumulate over many years in the future, with a quantified total value of €300m by 2030, based on improved maternal traits alone.

The key actions that farmers will have to undertake in relation to the scheme are;

The data recording and genotyping actions are very similar to the 2014 scheme, except that in the context of the new scheme, there will be an increased level of genotyping (60% of the number of suckler cows calved in the herd in 2014, to be genotyped in each of the 6 years of the scheme).

This is to help ensure that, going forward, we maximise the availability of potential replacement 4 & 5 star genotyped females for the purpose of the scheme.

Herd-owners should not worry unduly regarding the current €uro-Star Index of their herd, as the whole objective of the scheme is to improve these attributes over the 6 year duration of the scheme (and beyond).

Of course, once a herd-owner has applied and is enrolled into the scheme, then Department (& ICBF) will inform all herd-owners of the status of their herd regarding its €uro-Star indexes. [colored_box color="green"]This will then be updated on an annual basis as the scheme progresses. This initial picture of the herd will also form part of the training for the 6 year scheme, so that herd-owners can develop a clear replacement strategy that is specific for their herd.[/colored_box]

The Department and ICBF are confident that if herd-owners adhere to this policy, then the maternal efficiency of their herd will improve (as per the scheme objectives) – and that they will meet the compliance requirements set out within the scheme regarding number of 4 & 5 star replacements by 2018 (20%) and 2020 (50%).

However, this is exactly why the program exists, to promote a change in suckler cow breeding strategy on Irish beef farms. This will be dealt with in detail during the training part of the.

Applicants should not be deterred by this issue; rather it should be seen as an opportunity to improve your suckler herd replacement strategy.

There are many benefits to getting involved in this new beef genomics and data program.

Your pedigree animals (males and females) will be genotyped as a part of the scheme, with the cost of genotyping then netted off your scheme payment.

Indeed analysis by ICBF has indicated that of the 5,000 pedigree beef herds in Ireland, 90% would have all of their pedigree young-stock genotyped as part of the scheme, at no additional cost to themselves. [colored_box color="green"]The total cost of this genotyping is €1m/year or €6m over the full course of the scheme.[/colored_box]

Not only will this further help identify suitable pedigree males for the program (see below) and replacement females for your herd (including potential surplus replacements for sale), it will also serve as a vital insurance factor for breeders in relation to confirmed pedigree status for all animals in the future (i.e., pedigree breeders will have DNA verified status on all pedigree young stock going forward in the future as a result of the scheme).

Scheme herds will require genotyped 4 and 5 star bulls over the 6 years of the program (some 7k bulls/year). These will be provided by the pedigree breeders participating in the scheme, otherwise breeders will have to pay for the cost of genotyping themselves, with the current cost of genotyping a male animal being €50.

Pedigree breeders have taken the leadership on many initiatives in the past. For example, 80% of breeders were involved in the 2014 program. It is vital that we increase this further in the 2015 – 2020 program, if we are to ensure that the maternal efficiency of the Irish suckler herd is to be improved in the future.

Again, this is incorrect. Analysis undertaken by ICBF has clearly highlighted that of the 14,000 pedigree bulls born each year, approximately 10,000 will be eligible (i.e., are in the top 40% for either replacement index or terminal index, on a within or across breed basis).

Furthermore analysis from the 2014 program has indicated that the number of new breeding bulls required in scheme herds is some 7,000/year (the average length of productive life of a pedigree bull is 3.5 breeding seasons).

Therefore, there will be more than enough pedigree bulls to cater for the requirements of the program. Bull breeders or commercial farmers do not need to be afraid that there will be a shortage of bulls for the scheme.

Again, this is incorrect. There is a very wide range of AI bulls available for pedigree beef breeding that are 4 or 5 stars on either the replacement or terminal index.

In total there are some 164 bulls in that catalogue of which 151 (92%) are 4 or 5 stars on either the replacement or terminal index (within or across breeds). 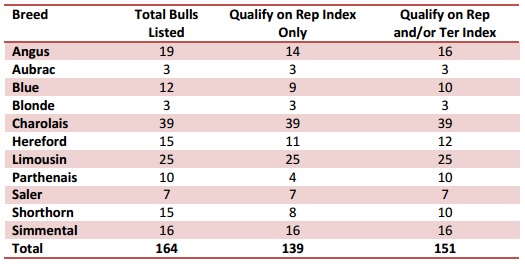 This simply serves to highlight that the challenge is not necessarily sufficient bulls, but rather establishing a mindset change regarding the type of bull that will be required in the future to breed the next generation of stock bulls.

Traits such as cost of calving, cost of maternal efficiency and cost of feed/maintenance will become increasingly important, as our suckler herd competes with other sectors for resources (land, labour and capital).

Again, this is incorrect. The scheme caters for the use of outcross sires, as the 80% compliance requirement on AI gives more than enough scope for pedigree breeders that wish to use some outcross sires as part of the scheme.

Indeed, recent analysis undertaken by ICBF has also indicated that the problem is not as large as some people might consider. [colored_box color="green"]For example, there were 166 new beef AI sires coded last year (both Irish bred and foreign) and of these, 69% are already compliant with the scheme.[/colored_box]

ICBF fully expects that one of the positive aspects of the scheme will be that AI companies and breeders will be much more vigilant regarding the type of “outcross” bulls that they purchase/import in the future and that this figure (69%) will increase significantly in the next 1-2 years.

This would be a positive outcome for the Irish beef industry.

For an AI sire (i.e., 90% data reliability) the figure reduces to €38, which helps to highlight the benefits of using AI when breeding female replacements.

Table 3. Impact of reliability and number of animals on change in €uro-Star replacement index 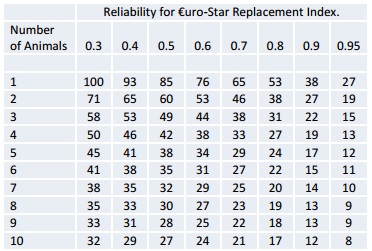 As indicated earlier, one of the key objectives of the scheme is ensure that all breeding animals will be genotyped as part of the scheme.

Based on experience from dairy, we expect this to increase the average reliability for replacement index for animals in the program from the current 30% (for replacement index) to 50% during the course of the scheme, which will result in a reduction in the potential change in a single animals proof from the current €100 (one animal at 30% data reliability) to €85 (one animal at 50% data reliability), through the use of additional DNA data. [colored_box color="green"]Of course another way for farmers to reduce the risk associated with data reliability is through using teams of AI bulls when breeding female replacements, which is exactly the approach taken by farmers participating in the Gene Ireland beef breeding program, operated by ICBF on behalf of the beef breeding industry.[/colored_box]

In that program, beef farmers generally use a team of four young beef bulls, which reduces the average change in bulls proofs (for the team) from €100 down to €50. Using a team of four genomically selected young bulls at 50% reliability, would reduce the range to €42.

Of course the exact same exercise undertaken above for bulls, is equally (and arguably even more relevant) in the context of breeding females.

As a result the expected change in proofs for these animals (across all 10 female replacements) is expected to be only €27, which serves to highlight why the scheme is so focused on using new technology (i.e., €uro-Stars, genomics and teams of animals) to support breeding strategy on participating farms.

Have you got a tailless calf? If so, the ICBF wants to know