A tractor driver in the UK had a lucky escape after his tractor was hit by a train at a level crossing this week.

His tractor was spilt in two after a train from Leeds to to York struck the vehicle.

The British Transport Police said that the driver was taken to hospital with minor injuries after the accident in North Yorkshire on Thursday evening (May 14).

It was reported that three passengers on the train suffered minor injuries and police and ambulance crews attended.

A spokesman for Northern Rail said that the Leeds to York service struck a vehicle on a level crossing between Knaresborough and Cattal. The incident was reported at 6.20pm.

Here’s a picture of what’s left of the tractor involved in a crash with a train on a crossing near #Knaresborough pic.twitter.com/O4NOtYgbIE

Police say the tractor driver and train passengers had a “lucky escape”, after a crash on a level crossing near Flaxby.

BBC Radio York reported that the police said the tractor driver and train passengers has a “lucky escape” after the crash. 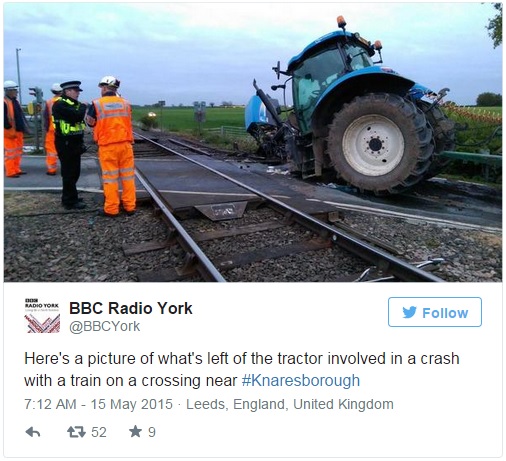 The A59 was closed until the accident was cleared and services on the railway line were replaced by bus services for the evening.

Train services returned to normal on Friday and an investigation is under-way as to how the accident happened.

Video: John Deere vs Fendt, who's got the power?