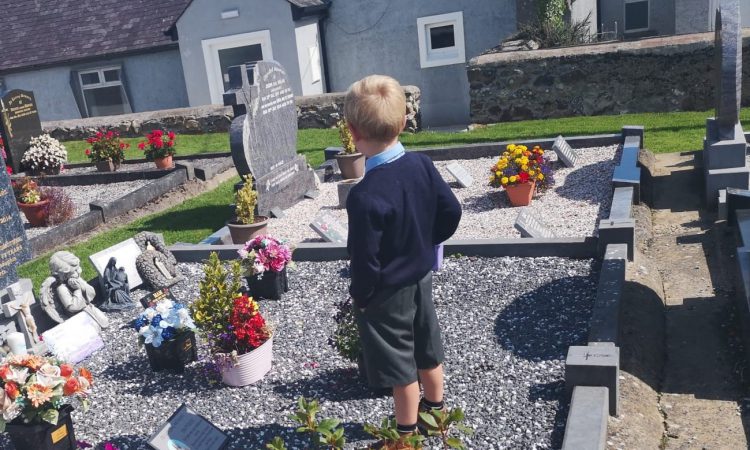 When a mother’s five-year-old son tells her he wants to tell his daddy all about his first day at school she will honour that request. And even if that means taking the little boy by the hand and bringing him to the graveyard across the road from the school where his daddy rests in peace – then that is what a mother will do.

And this is exactly what Diane Banville had to do in early September when her son Cillian told her he wanted to talk to his father at the end of his first day at the local national school in New Ross, Co. Wexford.

Cillian’s dad Kevin died in a farm accident in 2014 when Cillian was just five weeks old. His older brother Ryan was just two at the time.

For Diane, the accident changed everything – the couple had been married just 11 months and were celebrating the birth of their second child when on March 17 Kevin went out to his farm and never came home.

Our whole lives changed in that split second.

She continued: “It was a whirlwind – to think how suddenly your life can change and you have no realisation; you’re just on autopilot.

Diane says she “knew nothing about farming really” because Kevin was the farmer and it was he who dealt with the business side of things.

But the farming community were out in force to help and support Diane when Kevin died and it is something she will always be grateful for.

The farming community are great and they really helped and supported me after Kevin died.

She added: “They really rallied around and helped to get through the initial stages of Kevin’s death.

“We are still running the farm – over time you re-adjust and you figure things out – it’s an ongoing process.”

Meanwhile, after Kevin died, Diane found herself a single parent to the couple’s two little boys; when the realisation hit that she alone now bore full responsibility for their well-being she was overwhelmed by it all.

She continued: “Kevin was a fantastic dad and the realisation that they were going to miss out on that absolutely broke my heart.

“The children’s emotional well-being is paramount – I am very conscious of the long-term impact of Kevin’s death on the boys.

“And I did find that aspect of things very hard because there is not a lot of support out there for children who are bereaved – particularly for very young children.

“They were looking for their dad and crying for him and it is very hard because parents want to protect their children but with a farm accident you can’t fix the problem.”

Diane also pointed out that just recently his father’s death hit Ryan (7) deeply and he spent an hour and a half “crying for his daddy”.

You can’t actually imagine what it’s like until you go through it…for us it was hard.

She continued: “A year after Kevin died my father died and a year after that Kevin’s mother passed away.”

For Diane that was three deaths in very close succession that her two little boys also had to face.

“Suddenly the boys were more aware of death than other kids their age and I got really concerned then that if something happened to me my two children would be orphans,” she added.

“It was time then to reassure the boys that I wasn’t going anywhere.”

Meanwhile, the latest statistics indicate there has been 150 farm deaths in Ireland since 2014.

“People talk about statistics all time but they forget that behind every one of the statistics is a person.”

Meanwhile, she pointed to Cillian and his new beginnings at the local national school last month.

Cillian started school this year – that is a family occasion and yet for us, we stopped at the graveyard so Cillian could visit his dad to tell him all about his first day.

She continued: “So you have a five-year-old standing on a grave talking to his dad about his day at school – that really hits home I can tell you.

“That is just one of many milestones along the way where the kids’ dad will not be there and they will go to his grave to talk to him.

The mother of two says she constantly talks about Kevin so the boys know about him.

When someone tells one of them that they are like their dad they are absolutely delighted to hear that.

She continued: “Unfortunately, though, they will never actually know their dad. My main concern now is my kids’ welfare and the focus is solely on them and ensuring that they are okay.

“My kids were so small when Kevin died that I don’t think I even got the chance to grieve at the time.

“Even if I wanted to stay in the bed I couldn’t – the boys are early risers…but they have had to grow up a lot faster than other kids their age.” 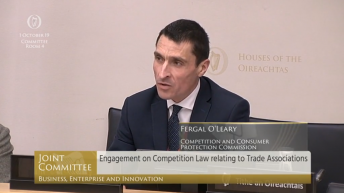 CCPC ‘working through’ 180 complaints from agri-sector