Teagasc: how to control scutch grass and thistles in the long-term

According to Teagasc, the most effective long-term control of scutch grass, thistles and perennial sow thistle is to apply pre-harvest glyphosate to a crop.

It says that the best results are achieved when the weeds are actively growing in moist soils.

Leaving glyphosate application until after the harvest is not as effective on these perennial weeds and a sizeable proportion of growers also use pre-harvest glyphosate as a harvest aid, Teagasc says.

The benefits of applying pre-harvest glyphosate to uniform, weed-free, standing wheat crops is marginal but it is of benefit in barley, it says.

Applying pre-harvest glyphosate also has implications for cross compliance as these field should have a green cover (sown crop or natural regeneration) established within six weeks of application, Teagasc says.

It says that crops intended for seed should not be treated.

Is your crop ready for glyphosate?

From 14 days before normal harvest date, collect 20 grains from the centre of several ears, it says.

Teagasc says to press your thumbnail firmly into the grain and if the indentation holds on all the grains the crop is ready for spraying (at or below 30% moisture content (MC) to avoid a yield penalty).

Target weeds must be green, actively growing and accessible to the spray, it says. 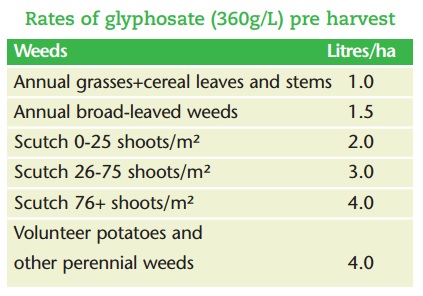 A minimum of five-to-six hours drying after application is essential for satisfactory results with all glyphosate products containing tallow amine surfactant formulation, it says.

Teagasc advises that glyphosate should be applied when at least two-thirds of the seeds are turning from green to brown in the middle of the main stem.

It is advisable to generally use a high rate of glyphosate when burning off the crop (e.g., Roundup Biactive 4.0L/ha) and especially when targeting perennial weeds, it says.

Use 200-250L/ha of water per hectare to get good coverage of the crop, Teagasc says.

Opinion: Fertiliser in 2022 – the debate has moved on