The Irish Cattle and Sheep Farmers’ Association (ICSA) has said that the Beef Market Taskforce “cannot begin its work” while injunctions remain in place against individuals involved in the beef protests.

The ICSA was one of the groups who was scheduled to take part in the Beef Market Taskforce meeting today, Monday, October 14.

This was supposed to be the inaugural meeting for the new body. However, the meeting was postponed for the day following a protest at the headquarters of the Department of Agriculture, Food and the Marine this morning.

The ICSA has said that will not play a part in the taskforce until these injunctions are discontinued.

“ICSA decided at an early stage this morning that we could not attend the taskforce while injunctions remain in place,” claimed Edmond Phelan, the association’s president.

Phelan insisted that he was not in favour of the physical clashes today – which saw Meat Industry Ireland (MII) senior director Cormac Healy being denied entry to Agriculture House – but placed the blame for this incident at the feet of the processors.

“ICSA does not condone physical clashes but the blame for the failure of today’s talks stands squarely with those meat processors who have so far refused to issue letters of discontinuance in respect of certain individual farmers,” said the ICSA president.

“There is no way these talks will commence until all legal threats have been removed,” he concluded.

The department confirmed earlier today that the meeting was suspended following “altercations” outside the department’s building, and also confirmed that “members of the taskforce were prevented from attending the meeting”.

Responding to the incident, Minister Michael Creed condemned it, saying: “It is in the interests of everyone involved in the beef industry that the work of the taskforce goes ahead.

The taskforce’s remit is to monitor the implementation of the actions arising from the agreement reached on September 15 and offers the most viable platform for strategic engagement with key stakeholders.

“It was a great pity that farm representatives were not in a position to air the legitimate concerns of farmers at the taskforce,” Minister Creed argued. 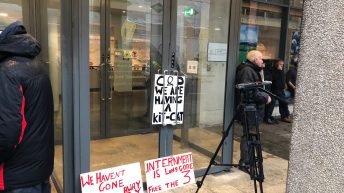