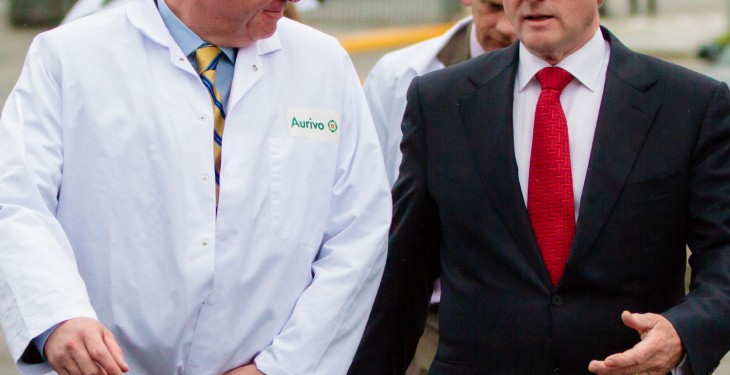 Aurivo opened a new €5.25 million state-of-the-art biomass facility at its Dairy Ingredients plant in Ballaghadereen, Co Roscommon today. On hand to formally open the new energy facility, which will reduce Aurivo’s Dairy Ingredients’ heavy fuel oil consumption by over 70% and its carbon emissions by 50%, was An Taoiseach, Enda Kenny, TD.

Commenting, An Taoiseach, Enda Kenny TD said: “Getting Ireland back to work is the top priority of the Government and to do this we have to make recovery local. I’m delighted to open Aurivo’s state-of-the-art biomass facility at its Dairy Ingredients plant in Ballaghadereen. Fuelled by Irish bio-mass, projects such as this will lessen our dependence on imported fossil fuels. Our agri-food industry needs to stay innovative if we are to keep Irish exports strong. Aurivo, which employs over 700 people in the West of Ireland, is an example of an innovative Irish company that is well positioned to capitalise on the massive growth and export opportunities in the post milk quota era. Initiatives such as this to support Aurivo’s growing dairy business will ensure the supply of quality employment across the West and North West of Ireland.”

Aaron Forde, Chief Executive of Aurivo said: “This is a prime example of innovation at work at Aurivo to support the businesses’ ambitions growth and export plans in the post milk quota era. From this Dairy Ingredients site, Aurivo processes over 250 million litres of milk annually, 92% of which is exported to 46 countries. One such country is Nigeria, where we currently supply 30% of its Enriched Milk Powder requirements, with volumes growing at 29% year-on-year. Our business model and strategic plan for our dairy business – Aurivo Focus 2020 – positions us for significant growth. Our milk suppliers, based across 12 counties, forecast increasing supply by over 20% after the ending of milk quota. With the heavy burden of energy costs impacting business performance across Ireland, the facility opening today greatly helps Aurivo on its path to sustained international growth.”

Aurivo is the first large scale milk processor to invest in biomass to provide a long-term energy solution. At an investment of €5.25 million, the facility will recoup the equivalent of its set up costs, in energy savings within five years. Operational from this month, ultimately, the facility will be developed into a major combined heat and power (CHP) plant, and by 2016, Aurivo plans to sell energy onwards into the national electricity grid. The plant will use 30,000 tonnes of woodchip each year, sourced from Aurivo’s subsidiary company ECC Teoranta in Corr na Mona, Co. Galway.