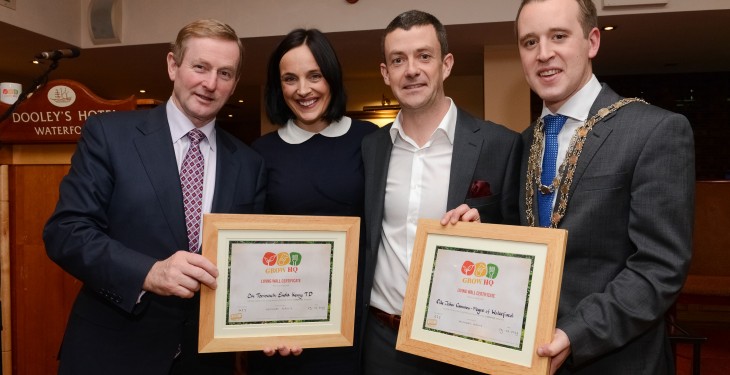 Taoiseach Enda Kenny was at Dooley’s Hotel in Waterford City on Saturday to help Grow It Yourself (GIY) launch its fundraising campaign for Grow HQ, the GIY national food education centre that will be based in the city.

GIY founder Michael Kelly announced that GIY has made significant strides towards its €750,000 fundraising target, having already secured €100,000 in funding from Bord Bia, Diageo and Waterford City Enterprise Board.

While recognising that the project is still in its early stages, and subject to planning permission, the Taoiseach praised the vision of Waterford City Council in bringing Grow HQ to Waterford.  He also praised Waterford Chamber and Waterford City Enterprise Board for the support they are providing to GIY.

Referencing Michelle Obama’s food growing campaign in the US, the Taoiseach said that Grow HQ could help generations of Irish children to understand the process of where their food comes from. He also pointed to the potential economic benefits of such a ‘visionary project’ for Waterford. “Grow HQ can help the southeast to bounce back and bring tens of thousands of visitors to Waterford,” he said.

Mayor John Cummins welcomed the Taoiseach to the city and said that Waterford City Council wanted to help GIY to ensure this important project would be based in Waterford.  The event was hosted by RTE ‘Ear to the Ground’ presenter Ella McSweeney who said that Grow HQ was exactly what Ireland needs currently as we battle with the twin problems of food poverty and childhood obesity.

Announcing their sponsorship of the project, Gary Graham of Bord Bia said that they see Grow HQ as a ground breaking project. “We recognise GIY’s track record in helping people to make better, healthier food choices. Grow HQ will get more people understanding where their food comes from, and that’s good for Irish food.  We’re delighted to be associated with it.”

GIY founder Michael Kelly highlighted the benefits of Grow HQ to Waterford: “Grow HQ will see Waterford taking a national lead on food and wellbeing. It’s also a positive economic story for the city, creating 25 jobs and bringing more than 250,000 visitors to the centre in the first five years.  It’s also very important to us that as GIY expands around the world, Grow HQ will anchor the movement here in Waterford where it all began.”

Kelly called on people and businesses in Waterford to get behind Grow HQ, and outlined various ways of donating to the project.  Individuals can sponsor a sod in the living green roof at Grow HQ for just €50.  For €500, local businesses can buy a brick in a ‘Living Wall’ in the centre and get their name alongside honorary ‘Founding Friends’ of Grow HQ, Enda Kenny, Mayor John Cummins, Ella McSweeney, Rachel Allen and Dooleys Hotel.