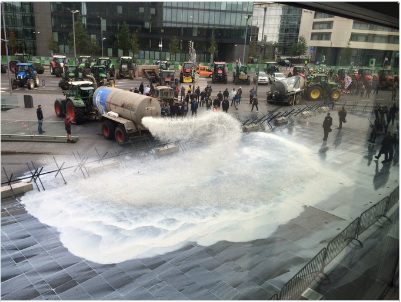 Protesting Belgian farmers sprayed some 40,000L of milk over the building beside where today’s Council of Agriculture Ministers convened today in the Place de l’Europe in Luxembourg.

EU Ministers for Agriculture, including Ireland’s Minister Michael Creed, met today in Luxembourg where they discussed the crisis gripping the agriculture sector.

However, farmers also arrived in the city with over 30 tractors in tow to protest against the low prices they are receiving for their milk.

Maarten Froger, a spokesperson for the Netherlands to the European Union, tweeted this photo of one of the tankers used to spill milk at the protest.

Johanna K, a Finnish worker in Brussels, captured the minute one tanker let loose, with a tweet as the tankers sprayed milk on the buildings.

At today’s meeting of ministers, the Commissioner for Agriculture, Phil Hogan was asked to come up with another financial package to help farmers in the face of ongoing volatility in the dairy and other markets.

The Minister for Agriculture, Food and the Marine, Michael Creed has called for maximum flexibility for member states, including Ireland, to be factored into the package.

It comes as pressure mounts from a significant number of Member States that any further aid package from the Commission would be coupled with milk production cuts.

It is understood that the new package which will be on the table at the next Council meeting in July will include measures to reduce milk production across Europe.