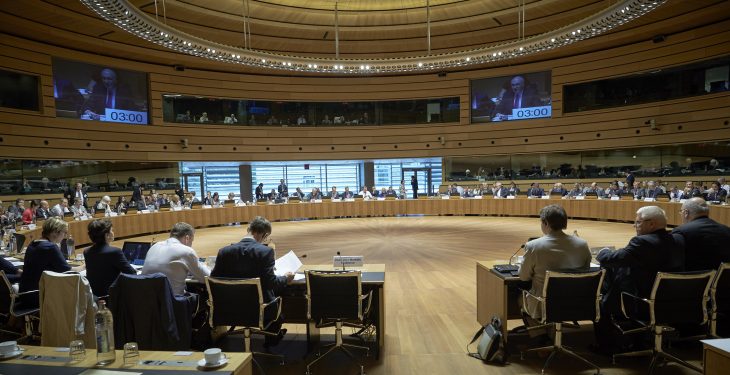 Another dairy aid package is currently being considered by the European Commission and will be presented to EU Agriculture Ministers in July.

At today’s meeting of the Council of Agriculture Ministers, Commissioner Hogan was asked to come up with another financial package to help farmers in the face of ongoing volatility in the dairy and other markets.

The Minister for Agriculture, Food and the Marine, Michael Creed has called for maximum flexibility for member states, including Ireland, to be factored into the package.

It comes as pressure mounts from a significant number of Member States that any further aid package from the Commission would be coupled with milk production cuts.

It is understood that the new package which will be on the table at the next Council meeting in July will include measures to reduce milk production across Europe.

“I agree that we should continue to look at all means of assisting farmers. But in doing so we should focus on direct and practical measures, and avoid taking any action that would in any way compromise their long-term prospects. Any package of measures must also factor in the changing environment in which we operate.

Minister Creed asked the Commissioner to consider the deployment of a targeted aid package, similar to that provided last September.

“This gave considerable flexibility to Member States to adopt responses suited to their national circumstances, and I believe such a measure could play a further important role in 2016.

“The key word here is flexibility and it would be important not to attach conditionality or complications to such targeted aid,” said Minister Creed.

The Minister noted the need for any package to acknowledge the changing currency situation post the UK EU Referendum and the unique trading relationship Ireland has with the UK.

The Minister also reiterated that the measures taken to date by the Commission have been extremely welcome, including Intervention. Minister Creed also asked the Commission to progress work on the removal of customs tariffs and anti-dumping duties on the importation of fertilisers.

“I believe our focus must remain on providing real, practical and immediate assistance for farmers. In addition to intervention, I have called for the deployment of other measures that will provide real benefit for farmers in the short-term including the bringing forward of the delivery date for direct payments.

“Last year Member States were also able to pay an advance of 70%, and I have again asked the Commission to consider raising this percentage further in 2016,” he said.