Looking for a new harrow or plough? – Check out the latest models from Lemken

The latest range of Lemken soil cultivation implements including its new harrow and plough ranges were showcased in Hungary this week.

Both Lemken and Krone – two family-owned German machinery manufacturers held a joint press camp to highlight their latest offerings to the market.

Over 130 international journalists were shown Lemken’s latest range of ploughs and harrows on the 10,000 hectare Gsuk family farm in Hungary on Tuesday and Wednesday.

One of the implements on show was the Lemken Rubin 12 disc harrow, a potential successor to the Rubin 9 model currently available in Ireland. 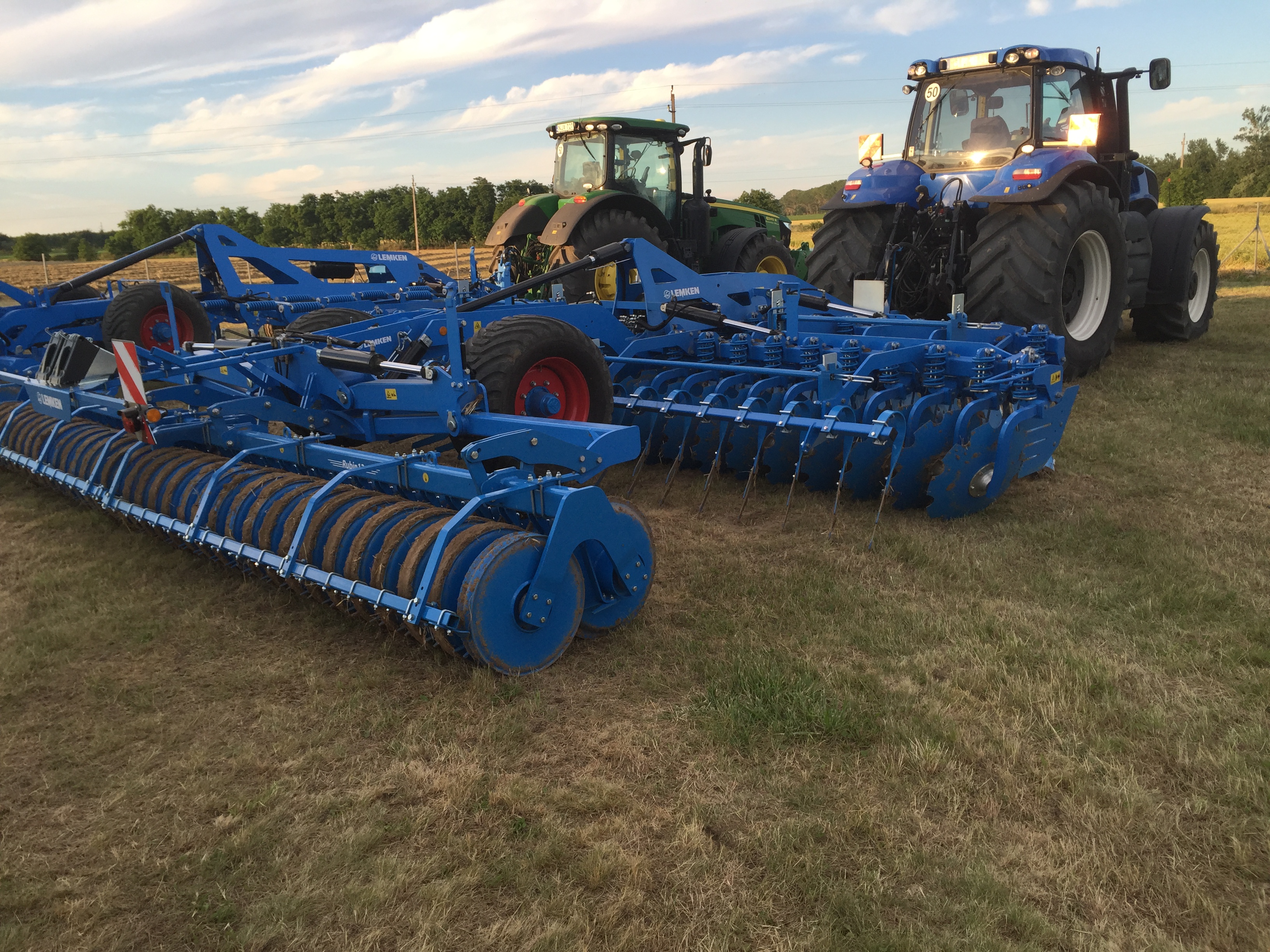 Lukas Voss from the Lemken Agro-training department gave a run down of the key features of the implement which was originally launched in 2014.

According to Voss, the Rubin 12 has been extended to a seven-metre working width and when it is combined with a high-powered tractor it is capable of harrowing a large area of ground.

Voss said that Rubin 12 plays to its particular strengths when large volumes of organic matter, such as stubble, need to be incorporated into the ground. 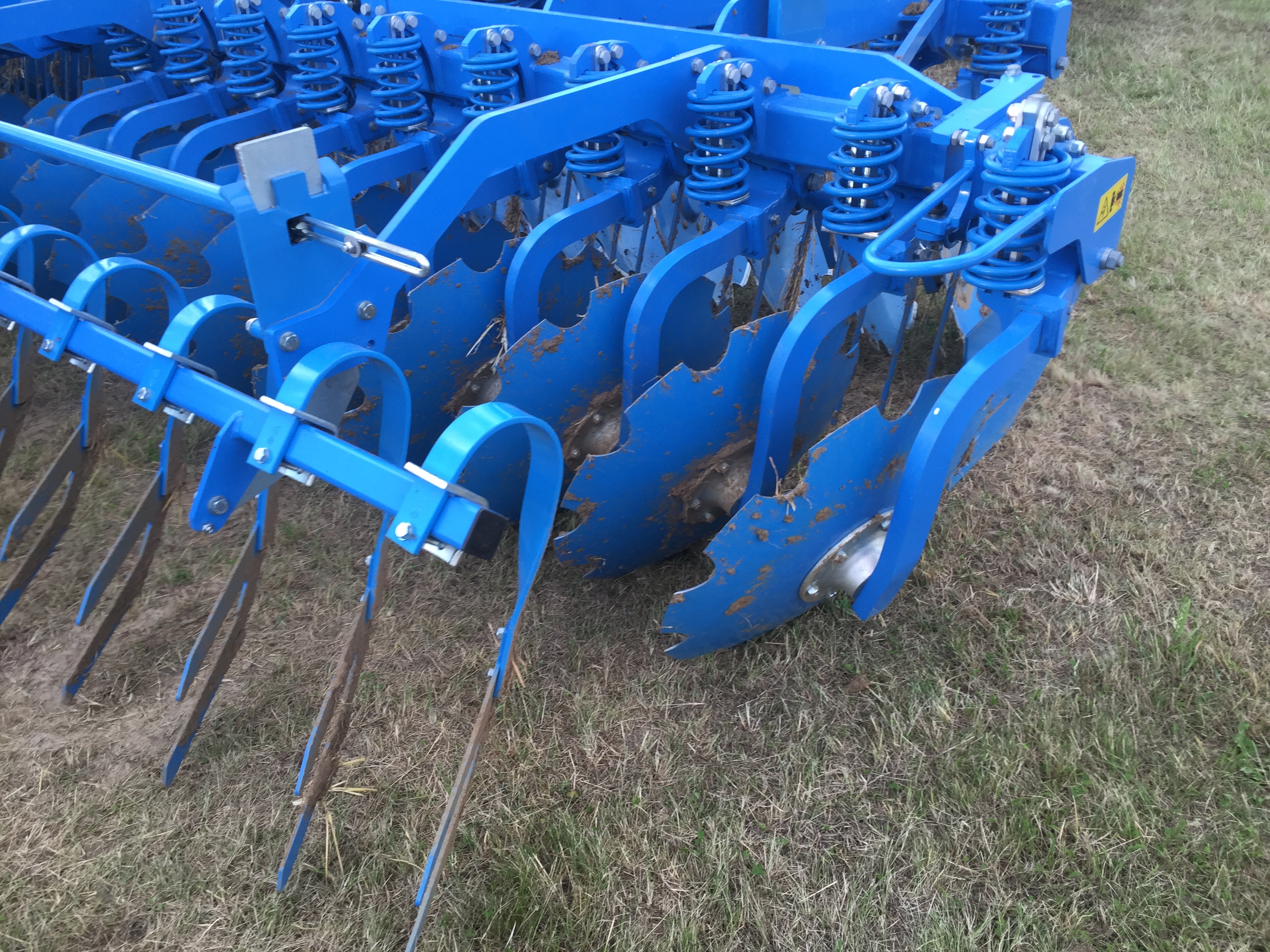 Angled discs on the Rubin 12

The disc harrow is fitted with two rows of separate concave discs with a diameter of 736mm, he said, which allows the machine to work as deep as a cultivator.

These two rows of discs, he said, allows the harrow to mix and crumble the soil intensively, while the 20 degree angle of the discs to the soil ensures optimum ground penetration.

The Rubin 12 is also fitted with a hydraulic depth adjustment system with an integrated display which allows the depth to be continuously controlled from the tractor cab, he said.

It also features self-leveling suspended rollers and this allows the machine to adapt easily to varying ground contours.

Key features of the Lemken Rubin 12: 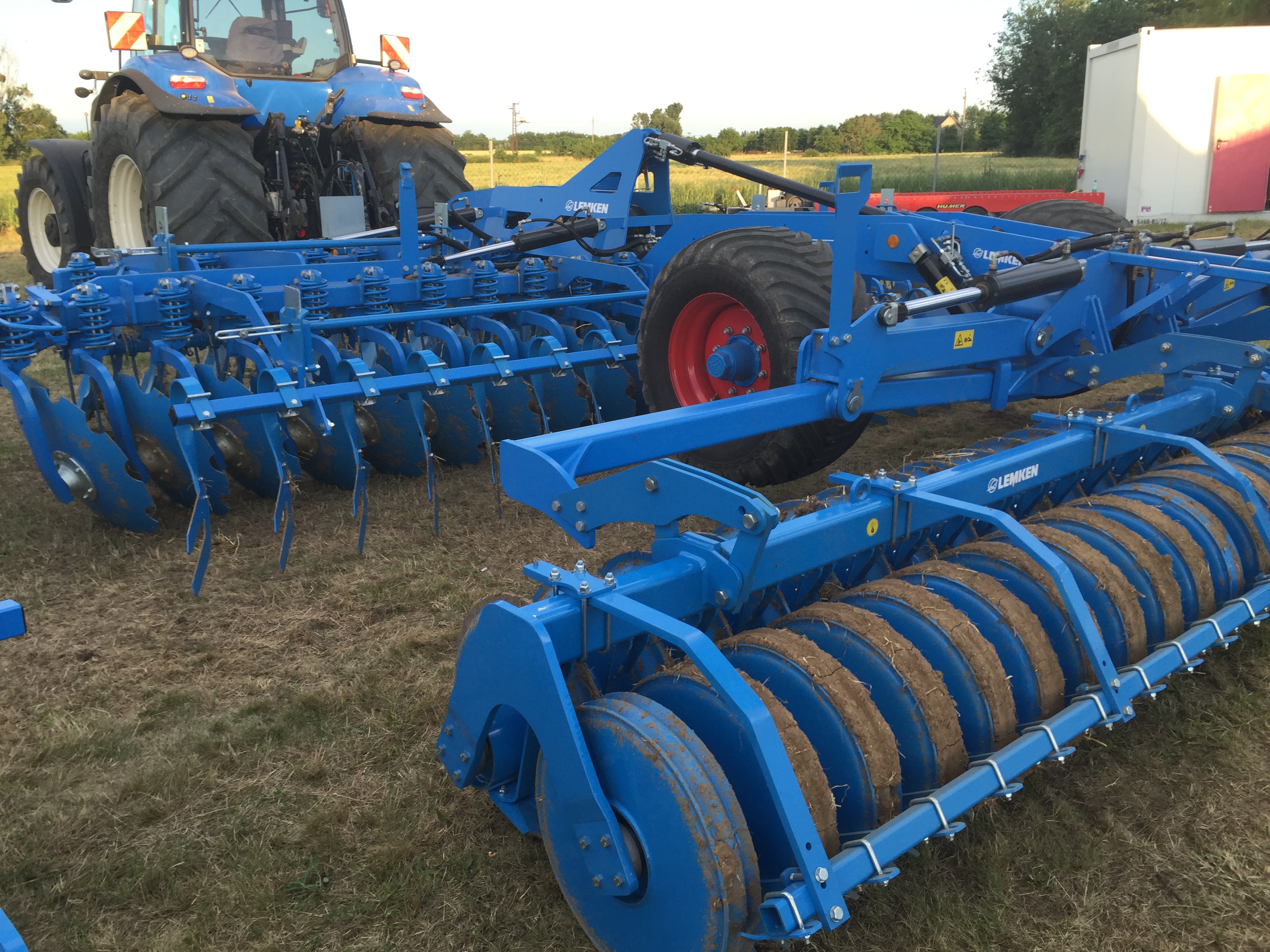 Self-leveling roller on the Rubin 12

Voss also spoke about the Lemken Gigant Heliodor system, which he said is currently the largest compact disc harrow available in the world.

The Lemken representative said that the machine is suitable for farmers looking for a harrow to cover large areas of ground, as it is capable of harrowing 25 hectares per hour. 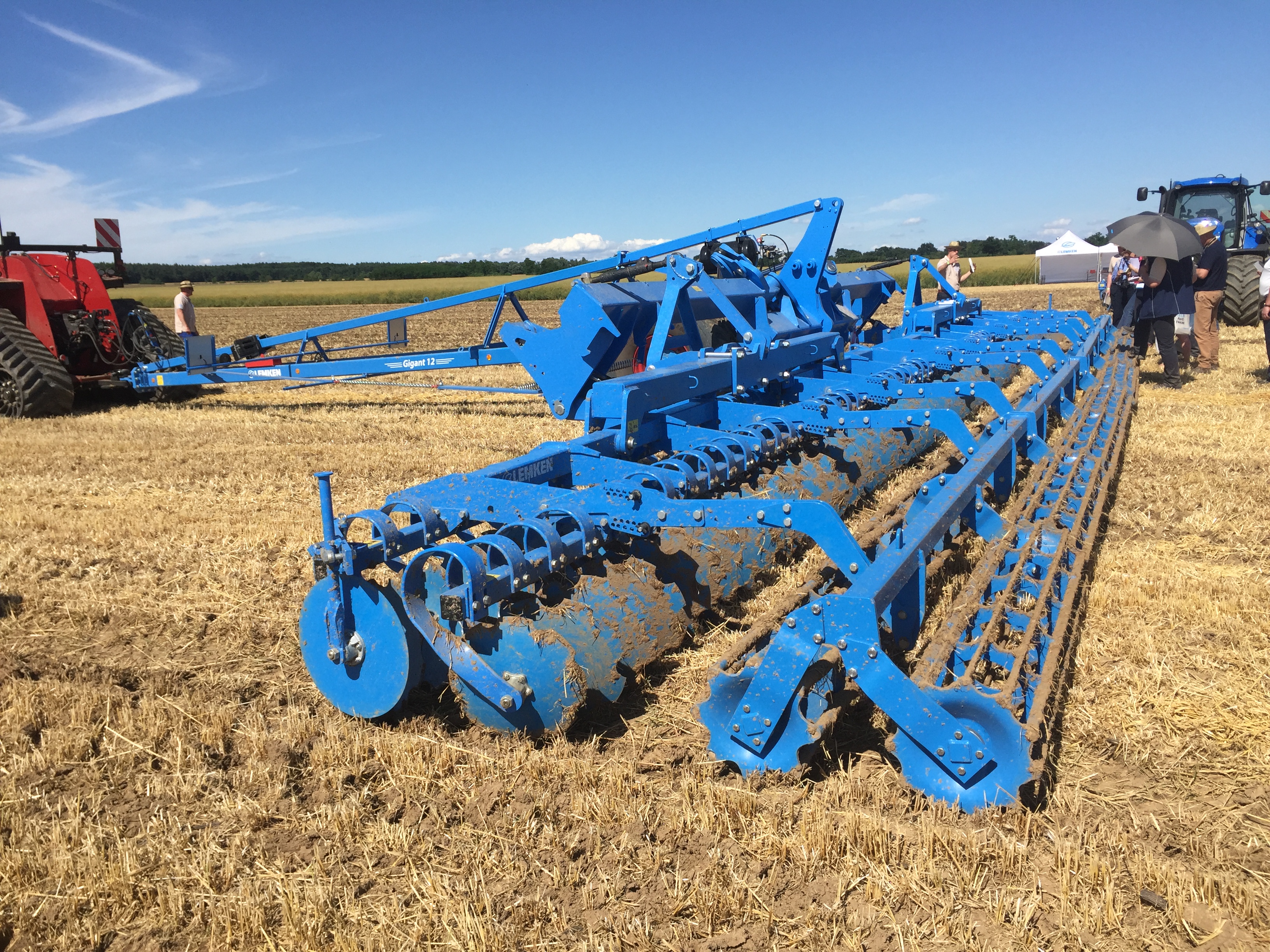 The harrow features a large disc diameter of 510mm, he said, which ensures a longer disc service life and allows for working depths of up to 14cm.

Voss also said that the harrow is quite unique as it has two-four metre sections to combine to form 8m units which are attached by a three-point linkage.

He added that these 8m units can be removed from the harrow and operated as stand alone disc harrows.

Each 4m unit also has its own independently operated roller, he said, which allows each section of the harrow to adjust to the surface contours of the ground.

This allows for precise depth control on uneven ground at all times.

Video: Take a look at the world’s largest disc harrow setting up

The Lemken representative also said that despite the machines large working width of 16m, it folds up to just 3.5m wide and 4m high.

The Gigant Heliodor system also has 800m wide tyres, he said, which allows for easy transport on the road and to reduce soil compaction when in operation.

Lemken’s Karat 12 is an ideal machine for farmers looking for an implement for intensive stubble cultivation, according to Peter Baugartner.

Baugartner said the implement is available in four-to-seven metre working widths and it is suitable for both deep and shallow cultivation. 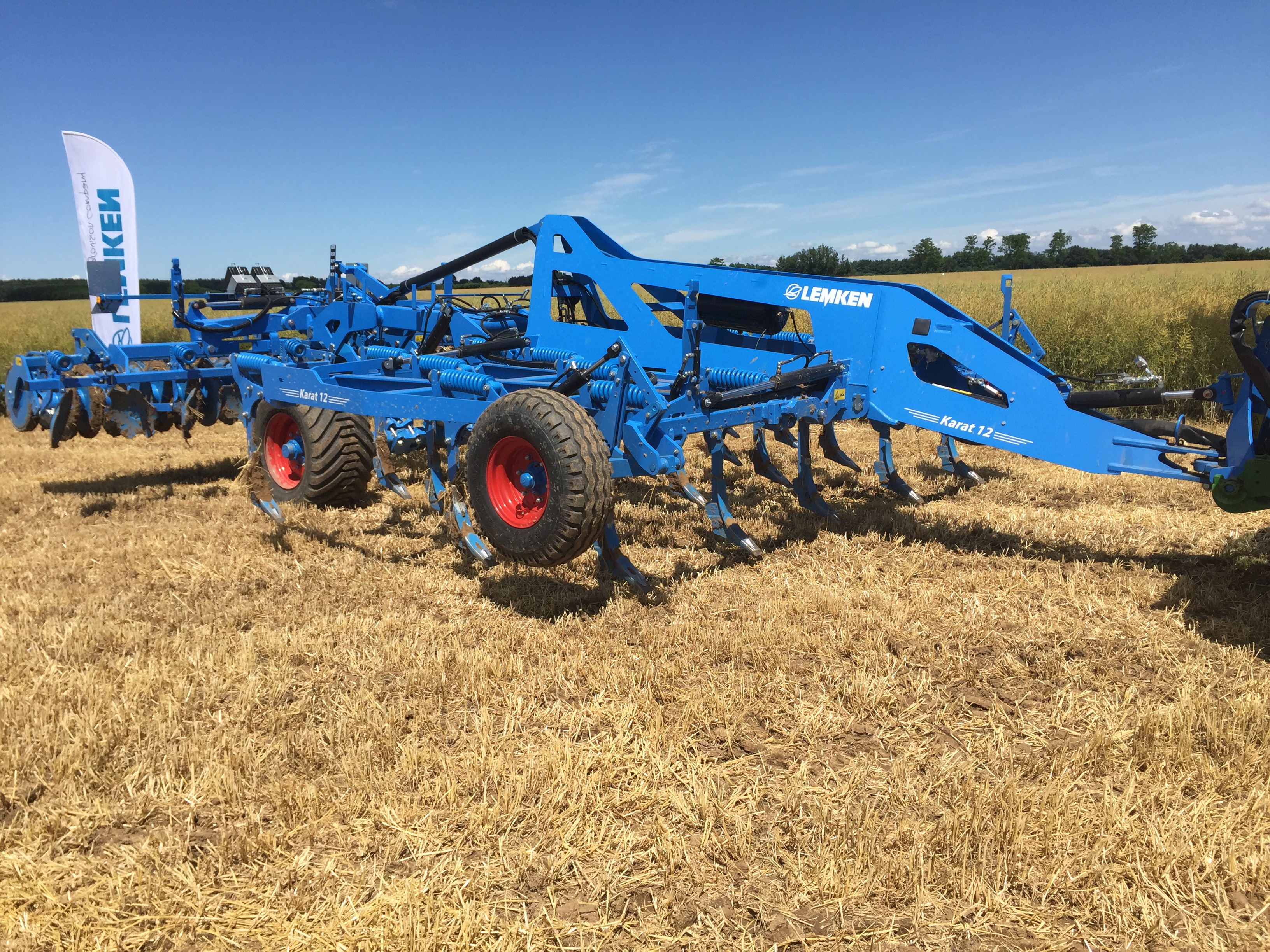 The Karat 12 is ideal for use in heavier soils, he said, as the four rows of tines deliver the desired loosening effect as well as effective mixing.

The cultivator is also fitted with concave discs for optimum leveling and the discs do not need to be adjusted separately even when working on uneven surfaces, he said.

Video: Check out the Lemken Karat 12 in operation

The working depth of the Karat 12 can also be adjusted from the tractor cab, he said, as each concave disc is equipped with a self-leveling system for precise, smooth and constant depth control.

He also said that the Lemken Karat 12 is a highly stable and compact cultivator that is also extremely agile at the headlands and during road transport. 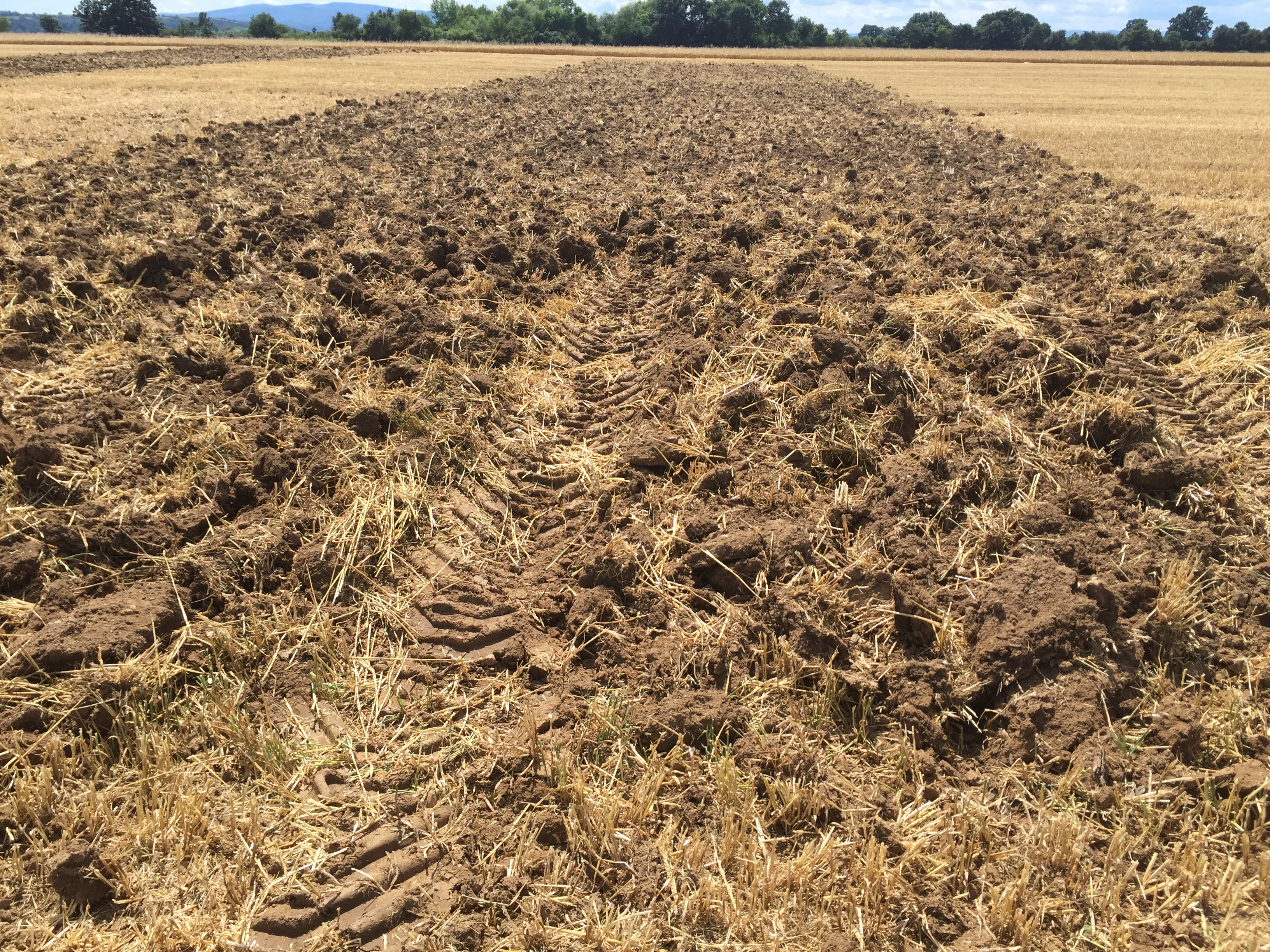 Soil surface after one pass of the Lemken Karat 12

The German machinery manufacturer has extended its mounted plough range with the introduction of the Jewel 8 M reversible plough, according to Lemken’s Matthias Maasuchus.

The Jewel 8 M is equipped with a short, robust pivot axle reversing system, he said, which allows the plough to rotate in a precise and reliable movement.

This plough is available in three-to-seven furrow options which are suitable for medium and high-performance tractors. 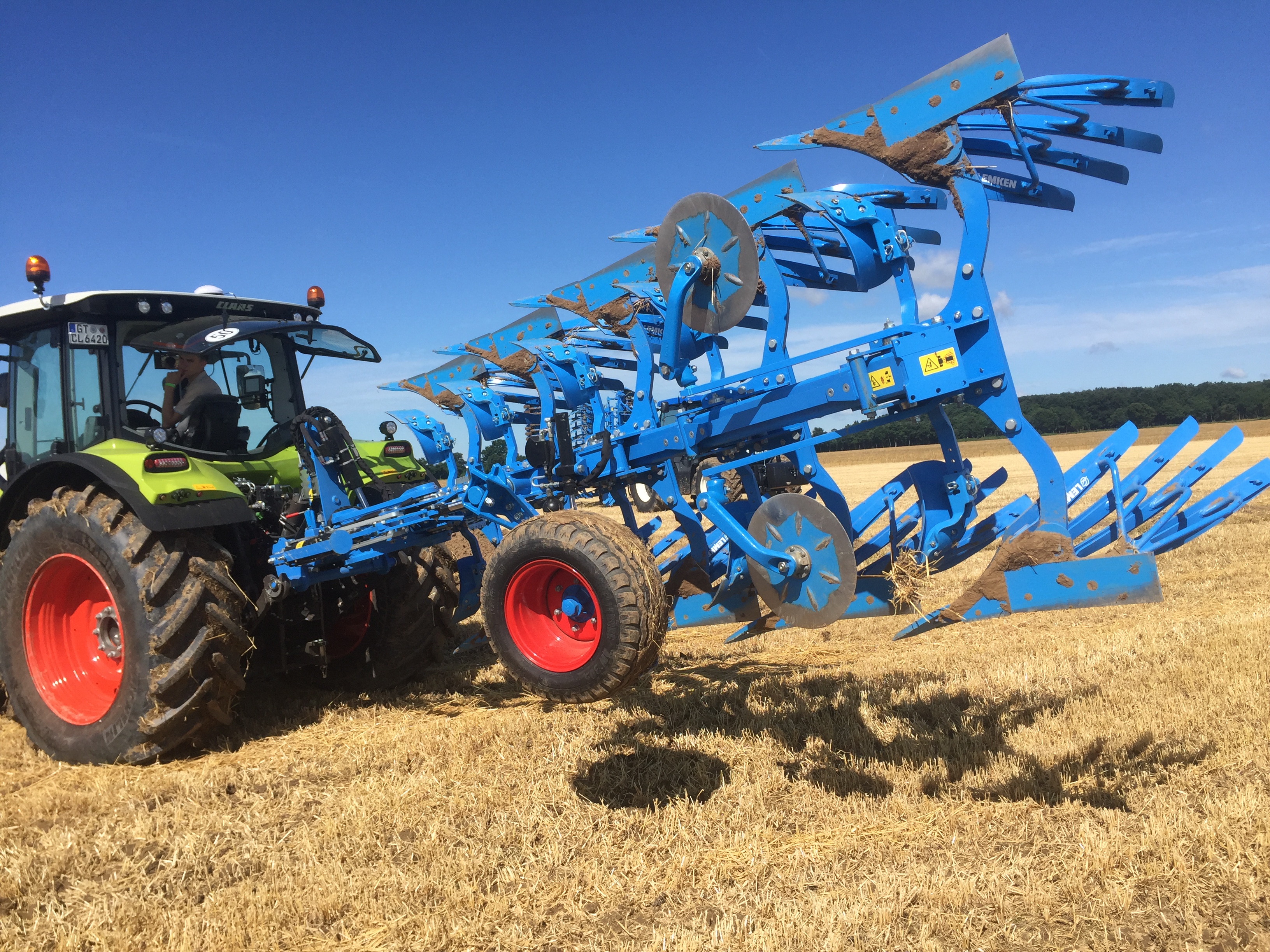 These bodies are available as full or slatted bodies in steel, plastic or hybrid versions to meet a wide range of requirements.

He also said that these boards are made from a special wear-resistant tool steel, without drill or punch holes, setting a new benchmark with a 150% longer service life compared to conventional plough bodies. 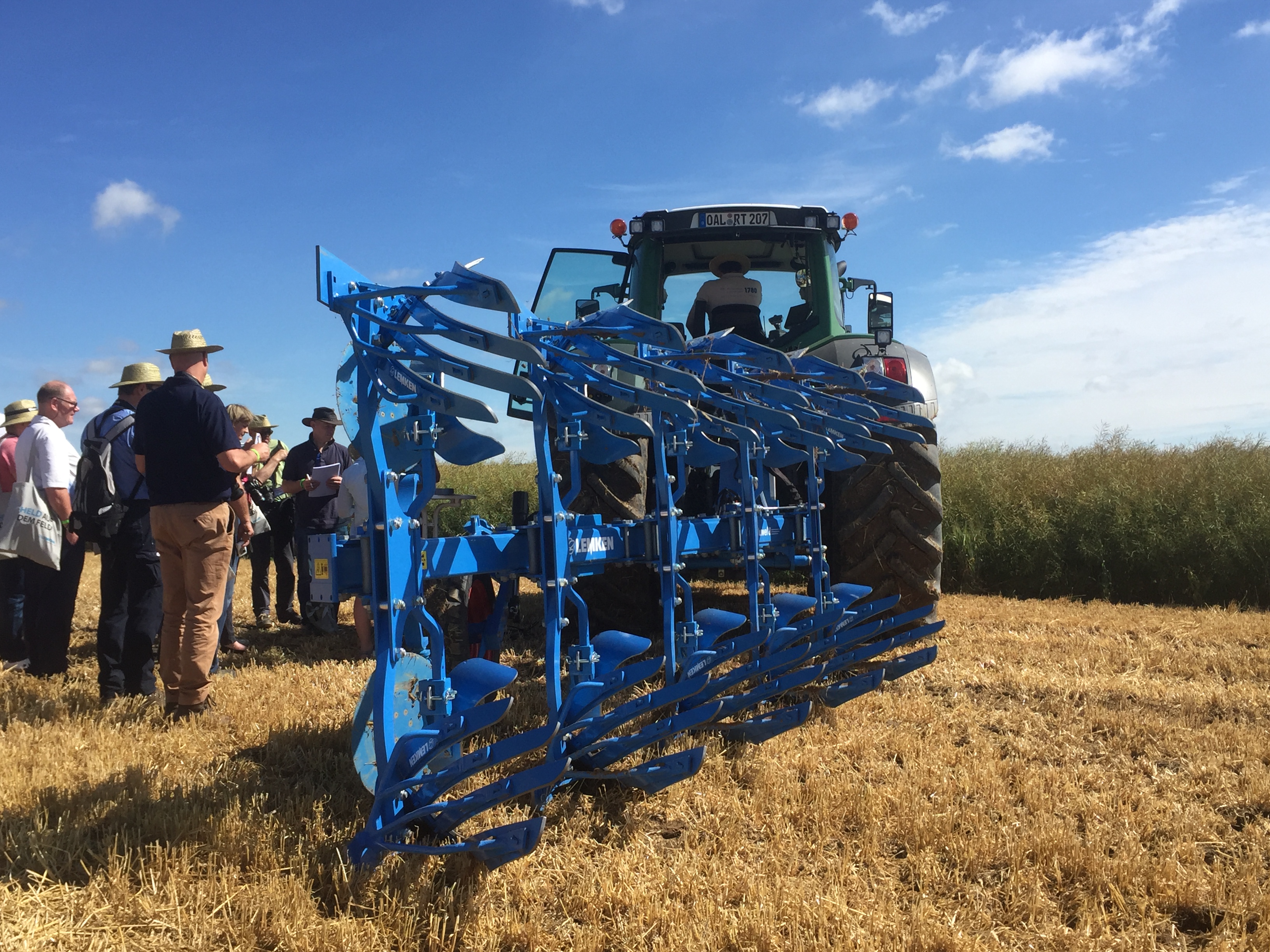 The Jewel 8 M can come with either a mechanical mechanism or hydraulic version which allows for four or an infinite number of depth controls respectively, he said.

Video: Take a look at the Jewel 8 M plough at work