The value of Sterling has been rocked again in early trading today, as market sentiment continues to be negative towards the currency.

Sterling remains at a 31-year low against the dollar with most commentators citing the lack of clarity or insights into how the European Union and the United Kingdom will move forward, following last Thursday’s vote.

Uncertainty remains rife with Germany and France giving mixed signals as to how Europe should proceed with the unprecedented divorce. 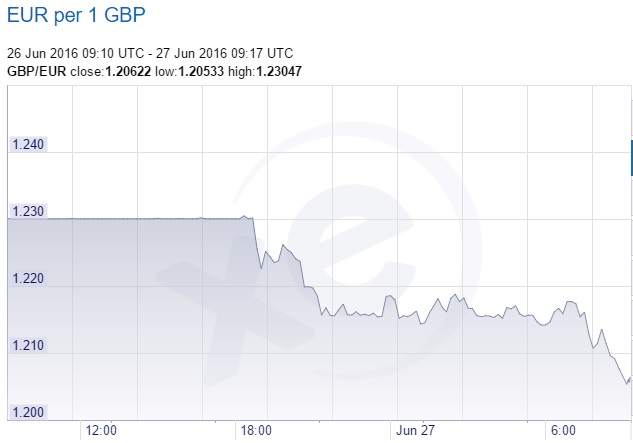 Meat Industry Ireland, the representative body for beef processors, has already highlighted how the uncertainty has already led to a substantial weakening of Sterling over recent months in advance of a further 10% collapse in the Sterling-euro rate on Friday.

Processors highlighted that this reduces euro returns and greatly challenges the competitiveness of our exports.

“The other concerning factor is the impact on consumer spending behaviour in the UK and its implications for meat sales.

“The UK economy looks set for a very rocky period and weaker consumer sentiment will likely negatively impact all grocery sales including meat,” it says.

In a statement this morning (Monday), UK Chancellor of the Exchequer, George Osborne moved to reassure investors that Britain is ready to confront what the future holds for us from a position of strength.

However, he warned that it is inevitable, after Thursday’s vote, that Britain’s economy is going to have to adjust to the new situation.

“The volatility we have seen is likely to continue in financial markets. Those markets may not have been expecting the referendum result – but the Treasury, the Bank of England, and the Financial Conduct Authority have spent the last few months putting in place robust contingency plans for the immediate financial aftermath in the event of this result.”