Supply/demand balance shifting back in the factories favour

The supply and demand balance appears to be shifting back in the factories favour as cattle numbers are expected to increase this week.

Procurement managers are clear in the assessment of the market with many indicating that lairage yards are either full for the week or are filling up fast.

And given the anticipated increase in supplies, some of the ‘sweeteners’ that were available on the market last week may be harder sought this week.

Cattle numbers appear to be growing slowly with supplies up by 3% or 959 head during the week ending January 29 on the week before.

During the fourth week of the year, some 33,158 head of cattle were slaughtered in Department of Agriculture approved beef export plants – the majority of which were steers (10,869 head) and heifers (9,645 head).

Both of these catagories showed an increase when compared to the week before, with steer throughput up by 5.5% (+563 head) and heifer numbers up by 0.8% (+72 head).

In addition, figures from the Department of Agriculture also show that just over 125,000 cattle were slaughtered in Irish plants so far this year.

Official figures also show that the cumulative heifer and aged bull kills are back by 2.1% and 14% respectively, but cow throughput has actually increased by 2,006 head or 8.8%.

R3 heifers made the equivalent of 420c/kg in Britain and 409c/kg in Northern Ireland.

Bord Bia also reports that the French market continues to be dominated by domestically produced beef while demand for cuts such as entrecotes and steaks remains poor.

Trade was best for offal products while promotions were limited focusing on domestically produced ribs.

The latest R3 young bull price was averaging at 372c/kg while the O3 cow price was making on average 303c/kg. 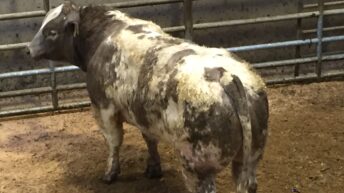