The figures for the 12 weeks ending December 4 in Ireland show that both Supervalu and Dunnes Stores now hold 22.5% of the grocery market each.

The market remains very tight at the top of the leader board, as just 0.7% separates the top three retailers in the country coming into the festive period, David Berry, who is a Director at Kantar Worldpanel, said.

“Having reached the number one spot for the first time last month, Dunnes now shares that position with Supervalu, a real testament to just how competitive this marketplace is.

“Supervalu has posted a positive 1% increase in sales during the past 12 weeks, with shoppers spending an extra €1 on average every time they visit a Supervalu store,” he said. 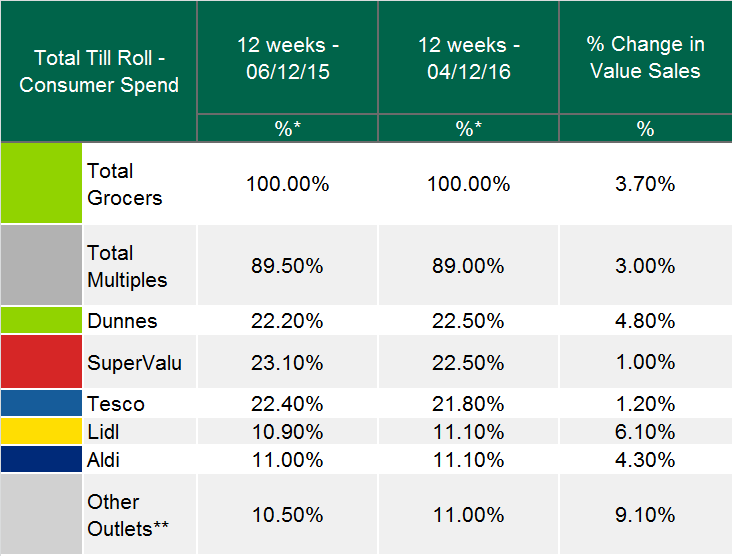 Dunnes Stores ‘Shop and Save’ campaign has continued to deliver results, according to Kantar.

Figures for the past 12 weeks have shown that nearly 64% of households have visited the retailer and have returned just over once a week, spending €39.50/visit which is an increase of almost €3 compared with last year.

Also, Dunnes is the only retailer which has delivered stronger growth for brands, up 5.7%, than own label goods, which increased by a more modest 3.3% over the past 12 weeks.

In the past quarter, Tesco has reported a growth in sales values for the first time since March, Berry said.

An additional 10,000 households have chosen to shop with Tesco in 2016 and are returning to the retailer more frequently, a clear positive sign for the grocer.

“Lidl increased its sales by 4.3%, ahead of the overall market which is growing by 3.7%, leading to a slight increase in market share for the retailer.

“Meanwhile, Aldi continues to post positive results, demonstrating the strongest growth of all the retailers with sales up more than 6% year-on-year,” he said.

Supervalu own brand products soon to be available to Chinese consumers