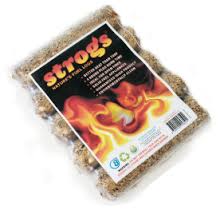 Walking through my local Spar recently I spotted an interesting product called Strogs. Strogs are briquettes that are manufactured using straw.

Speaking to AgriLand, Niall McGrath founder of Agri Bio-Fuel Ireland manufacturers of Strogs and tillage farmer from Dublin, said: “At the time the concept came about in 2007 we were getting very little for our straw. My father said to me is there anything we could do to make more off the straw. So I basically just Googled the different uses for straw and saw the idea online. Next thing I know I’m flying over to Denmark to see companies over there who are making similar products.”

McGrath explained that it was 18 months to two years before the business really took off.

“After our appearance on RTE the business really grew.”

McGrath said the business ties in very well with the life of a tillage farmer.

The process of making Strogs involves taking the baled straw in off the field dry. The bales are then fed into a hopper, where the straw is milled and sent through our system. Under the heat of compression, the lignin in the cell walls melts, which binds the logs together, once cooled. The logs are then trimmed, collated and packed ready to be used in your open fire or solid fuel appliance.

According to McGrath: “We grow about 500 acres of corn ourselves and we bale another 2,500 bales of straw from about 12 different farmers in the area.”

“The most important thing is that the straw is dry, so this summer was a real pleasure for getting the straw in. We use wheat, barley and oilseed rape straw. From a big square bale 8x4x4, that weighs approx. 550kg we make in the region of 550 kg of briquettes so there’s no waste really,” he noted.

“So far I’m pleased with how the company is going were holding our heads above water.”

Strogs can be burned in open fireplaces, ceramic stoves, kitchen stoves and central heating boilers. They can be found in more than 500 stores nationwide and are well stocked in Spar, Mace, Centra and Lidl. They come in packs of five and retail at €2.50 a pack.