Sterling strengthens considerably over the past month

The value of Sterling compared to the euro has strengthened considerably over the past month, figures from the European Central Bank (ECB) show.

At the end of trading yesterday, one euro purchased 85p Sterling, putting it in a considerably stronger position than a month earlier.

Back on the corresponding day in November, one euro purchased 0.89p Sterling and just days earlier is sat at €1=0.90p.

Much of the fluctuations seen in exchange rates since June can be attributed to the UK’s decision to leave the European Union.

And exchange rate analysts have predicted that the value of the euro against the Sterling could fluctuate between 75p and parity while the UK sorts out its Brexit affairs with the rest of the European Union. 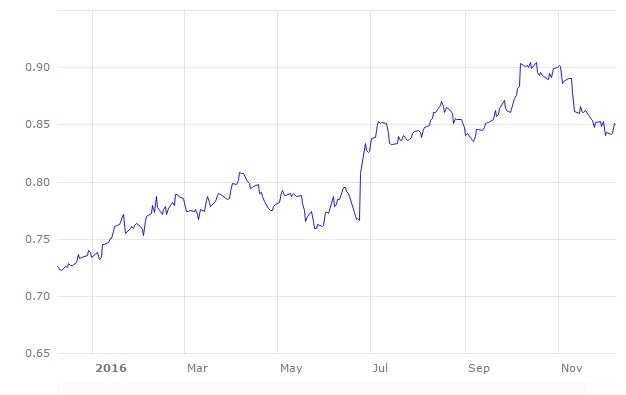 Speaking recently, the Teagasc Economist said Brexit has yet to happen, but the fall in the value of Sterling is already having a big impact on Irish exporters.

Donnellan said that there has been significant movement on the currency markets since the result of the referendum became known in June.

'Brexit is the biggest peacetime challenge the UK has ever faced'