Spotted the Moy Park chicken ads at the World Cup? 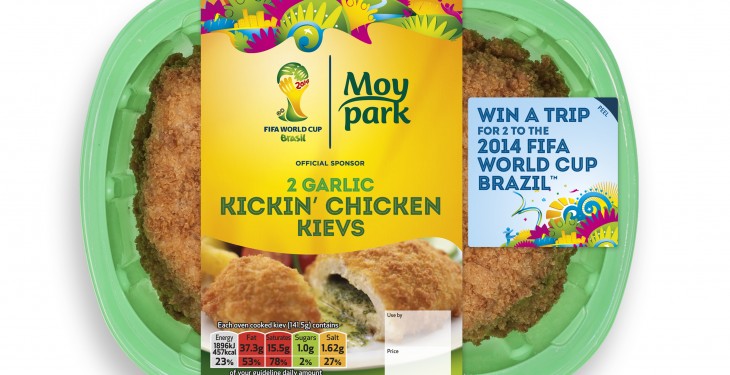 Beady-eyed soccer fans may have been surprised to see the Moy Park chicken hoards at this year’s World Cup matches in Brazil.

Moy Park is, however, owned by Brazilian food giant Marfrig and the deal puts the brand alongside the likes of Budweiser and McDonald’s.

According to Andrew Nethercott, Moy Park Director of Brand Marketing, the World Cup advertising is a huge opportunity for Moy Park to raise its profile on a global scale.

“The FIFA World Cup is among the world’s most widely viewed sporting events watched in over 200 countries by over 715 million people.

The Moy Park brand will be beamed to millions of viewers across the globe on pitch perimeter boards during matches featuring European teams including those involving England, France, the Netherlands and Spain to name just a few.”

He said the company has lots of exciting initiatives to celebrate the sponsorship with our customers, consumers and employees. “We ran an on-pack promotion on Moy Park branded products to give away a trip to Brazil to watch a World Cup semi-final game as well as giving away 2,014 exclusive Moy Park FIFA World Cup footballs.”

He also said that the use of social media has had an increasingly important role to play in consumer communications. “All our promotions drive consumers online and we are using social media in new ways to engage our audience. Our social media activity around the World Cup sponsorship has seen engagement and followers increase significantly.”