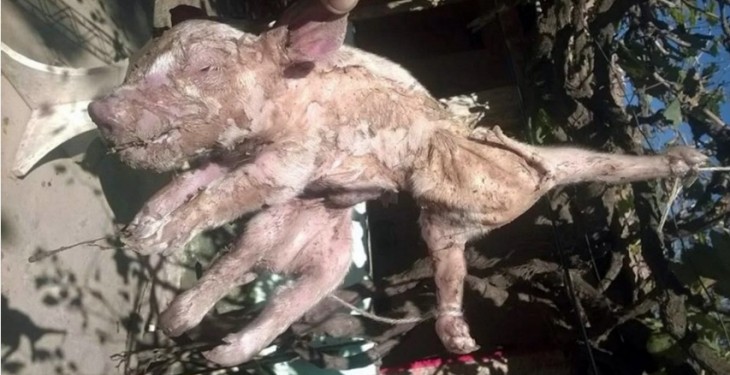 A farmer in Argentina was shocked to discover that one of his sows had given birth to a deformed piglet – with eight legs.

Dubbed ‘Spiderpig’, after Homer Simpson’s pet pig in The Simpsons, the piglet is reported to have died soon after birth.

The farmer who owns the sow, Santiago Valdez, farms in El Galpon in the Salta province of Argentina.

He revealed that the sow also gave birth to another piglet that was also deformed. It was born with two mouths and also died soon after birth.

The photos were posted on social media by the farmer and then went viral. Speaking to the media, Valdez said that he had no idea why it happened.

I was surprised that nobody has asked for it to carry out investigations. But nobody asked for it, so I just threw it away.

He said that he hadn’t noticed anything unusual with the sow while she was gestating however, she had begun to produce less offspring.

It has been reported that the deformities have been caused by certain toxic chemicals farmers are using in Argentina on their lands.

However, there has been no confirmation that it was the chemicals that caused the piglet to form as a ‘spiderpig’