Speeding driver claims he was rushing to help cow give birth

A restricted driver who admitted doing almost twice his permitted speed, claimed he was in a rush to assist with a cow giving birth.

18-year-old Jay Rowan of Carnlough Road, Broughshane, Co. Antrim, is restricted to 45mph but was detected in a Seat Leon doing 83mph on the northbound section of the M2 motorway in Co. Antrim.

At Ballymena Magistrates Court a guilty plea was entered to an ‘excess speed’ charge relating to May 19 this year.

A prosecution lawyer said police stopped Rowan and he made no reply after caution.

At court, defence barrister Stephen Law said: “He had received a call, he helps out on the family smallholding and a cow had prematurely started to calve, and had got into difficulties.”

Law said his client was making his way to the smallholding “to see if he could assist”.

The lawyer said Rowan accepted he was “going far beyond what he should have been”.

“In the circumstances,” Law said he was asking the court to give as much credit as possible and not ban Rowan from driving.

The barrister said his client works as a driver with an engineering firm and added: “He is needed; his father needs him on the smallholding, but also he needs his licence for his engineering position.” 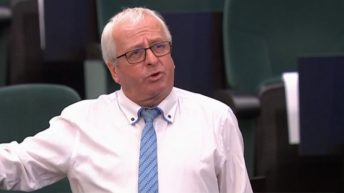