Some good news on the beef price front

Like last week, beef cattle prices have remained steady as factories are finding it difficult to source stock.

The dry settled weather in recent days will have played a part in the amount of cattle being presented for slaughter.

Factory quotes this week, for steers and heifers, remain largely unchanged from last week. Processors are offering a base price of 375-380c/kg for steers and 385-390c/kg for heifers.

In addition, there are reports from farmers that heifers are making up to 395c/kg in some parts of the country; especially in locations where ground conditions are good and farmers are under no pressure to market stock.

Most cow quotes also remain unchanged; factories are offering 310-315c/kg for P-grade cows and 320-325c/kg for O-grade animals. Some procurement managers are keen to secure “nice” O-grade cows and buyers are willing to rise above the base price to secure such animals.

Strong Supplies For The Foreseeable Future

Recent analysis of the Department of Agriculture’s AIM (Animal Identification and Movements System) database suggests that strong cattle supplies are likely to continue for the foreseeable future, according to Bord Bia’s Joe Burke.

This comes on the back of the growth that is evident in male cattle and beef-bred females within the 12-24 month age category.

Burke concluded: “This rise in animal numbers is mainly attributable to higher calf registrations combined with lower live exports during 2016.” 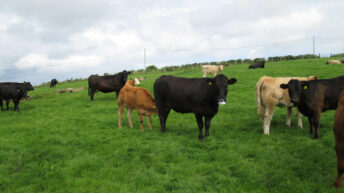