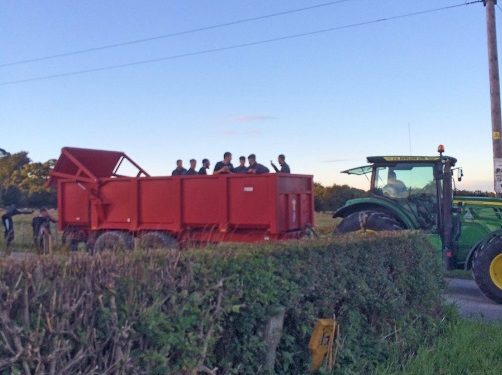 A soccer team in England hitched a lift home in a tractor and trailer at the weekend after the coach that was bringing them home from an away game broke down.

Bamber Bridge FC travelled to play Scarborough FC in the Evo-Stik League Northern Premier, First Division, however on the way home from the match, which ended scoreless, their coach broke down.

According to Alan Bateson, a fan of the team, a member of the squad managed to flag down a “taxi” which was in the form of a John Deere tractor pulling a trailer.

Thanks to @nreno1977 for flagging down this beast of a taxi. pic.twitter.com/9KMx5pRV0i

Bateson tweeted that the bus had broken down and that supporters and the team were “stranded in the wilds of Yorkshire”.

The tractor driver then brought them to the nearest pub and despite not getting home until later than expected Bateson said that it was the best away trip ever.

The players then had a whip around, where they gave the tractor driver £50 for the lift, according to Bateson.

A video of the team, management and fans singing in the back of the trailer has since surfaced on YouTube, which was taken from Neil Crowe’s (a player on the team) Twitter page.

He tweeted “unbelievable scenes as coach breaks down and tractor takes us to the nearest pub”. It’s definitely one away game the team won’t forget!