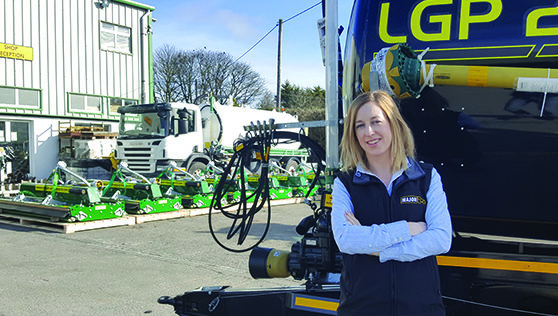 After outgrowing its current site, Ballyhaunis-based Major Equipment Intl Ltd has purchased 5ac acres close to the factory where it plans to drive ahead with development in the coming years.

Final plans for the business, which has built up a strong global base, will be confirmed next year.

Established in 1976 by brothers Mark and John Murphy, the agricultural machinery manufacturer started out by specialising in trailers and safety cages.

This move initiated the development of the renowned Major slurry tanker – sold in many international markets.

A range of basic grass slashers was also developed around this time, which helped spread work more evenly throughout the full year.

From these humble beginnings, the company has grown into a global business that employs 77 people and exports 65% of its annual production to far-flung locations such as Australia and South Africa.

John purchased Mark’s shares in 2007 and Mark went on to establish AgriSpread with his sons.

Back in 2002, John’s daughter, Eibhlin, joined the company as the marketing coordinator. Having graduated in international commerce from UCD in 2000, she worked in Dublin and Sydney for a number of multi-national companies and banks before joining the company at its UK depot. She moved back to Co. Mayo in a marketing role in 2005.

To grow the agricultural side of the business over the last 12 months, we focused on two key activities: new products – the Major Cyclone Mower and further development of the tandem-axle tanker range – and new markets; growing our presence in Australia and New Zealand.

The Major 2.5m Cyclone Mower was launched at the 2015 National Ploughing Championships.

“It was designed to bridge the gap between a grass topper and a flail mower. Most farmers have a mix of grassland, and from time to time heavier areas need to be controlled,” said Eibhlin.

“Prior to the Cyclone Mower, the only machine suitable for heavy scrub clearance was a flail mower. A Cyclone Mower can be used for everyday pasture management and for heavy ground clearance. It requires approximately 90hp – making it accessible to the majority of farmers,” she said.

However, a flail mower has a very high horsepower requirement; so isn’t suitable for the average farmer who might only have 100hp available. A 2.5m flail mower requires a minimum 130hp to drive it.

“This typically results in a farmer hiring a contractor to do this work and being at the mercy of the contractor’s busy schedule. Current fuel prices can make a flail mower expensive to run,” she said.

“We use Strenx 700 MC high-yield steel in the manufacture of this mower. It is a high strength steel; yet is lighter than steel traditionally used in manufacturing.

“In 2013 we began working with this material for our ground-care products. We transferred the skills gained working with it to our Cyclone Mower. It allowed us to reduce the overall weight of the mower by 30%, making it lighter to tow and reduce the strain on the tractor,” she said.

The mower was a gold medal winner at the National Ploughing Championship’s Innovation Awards in 2016.

“Through a focused advertising campaign, dealer training, and a successful demonstration road-show in Ireland, we have produced and sold 120 units since the product launched. This is a unit we expect to gain increased market acceptance in Ireland and overseas in coming years,” said Eibhlin.

Turning to the tandem-axle tanker range, she said that the slurry tanker industry is an extremely competitive and price-sensitive market.

“Other manufacturers tend to offer a standard product, available off-the-shelf with no modifications. We offer something different on the larger-capacity, tandem-axle tankers of 2,500 to 4,000 gallons.

“Our customers receive a bespoke design service, to ensure that the product is exactly right for their specific requirements.

“A site visit is the first step in this process, to get a true understanding of the customers’ business and how the tanker will work for them. Our team will design and ‘spec’ the unit and issue complete, working 3D drawings before production.

“The tanker is then manufactured and delivered to the customer’s premises complete and ready for operation,” she said.

Major has its eye on the Australian and New Zealand markets, where growing seasons are the opposite to Ireland – extending the selling season of its grass-cutting machines.

“In 2012, we began working with an Australian-based distributor called FieldQuip. It is a manufacturer of complementary agricultural equipment – with a well-established dealer network throughout Australia and New Zealand,” Eibhlin said.

Other key markets include: Belgium; Denmark; Germany; Iceland; Italy; the Netherlands; and the UK.

Finding suitable distributors has been a challenge; however, screening processes help with decisions.

Lack of trading history is an obstacle when starting with a new distributor, explained Eibhlin.

Relationships take time to develop. We are cautious and request payment upfront for the first two years of trading. This has resulted in virtually no bad debts from our overseas distributors.

“Despite growing our business in mainland Europe and Australia, the UK is one of our biggest markets. Sterling fluctuations have negatively impacted our business many times over the years; particularly since the Brexit vote.

“There are many uncertainties surrounding this decision so it is difficult to react. We have continued to focus our efforts on overseas markets to reduce our over-reliance on the UK.”

‘The average age of our welders is 58’

Legislative changes also have ripple effects on the business.

Changes to when and how a farmer can spread slurry have an impact on our business. Closed slurry spreading periods often mean that the sales will drop during this period; we have little control over this.

A shortage of skills in fabrication and assembly is another issue; the company takes a hands-on approach.

“We have a serious shortage of experienced welders and fabricators. The average age of our welders is 58,” she said.

To boost the skill level throughout the business, Major runs a skills matrix which is analysed every year by the supervisor in each area. Any gaps identified are addressed.

“This year we are starting an accredited apprenticeship programme to help boost the skill levels in the assembly area.

“College is not for everyone and we find the people we take on are very capable and like the hands-on aspect of the work. My own husband did an apprenticeship with our company before I met him,” she said.

87 people are employed in the business, between Ireland, the UK and the Netherlands. Production accounts for 65 employees; five are in research and development; nine work in sales and marketing; and eight in administration and accounts.

Looking back, she said, access to finance during the downturn was a huge concern.

“2008 to 2011 were difficult years for the company. In one year we lost 50% of our business. Despite having a healthy balance sheet and a 30-year history with our bank, it reduced our overdraft facilities significantly.

This made it very difficult for us to run the business. We are in a stronger position financially at the moment and we are currently meeting with other banks to discuss future requirements.

At the moment, there are no plans to change the managerial structure, according to Eibhlin.

Her dad, John Murphy, is managing director, and with her on the management team are: Martin Keane, general manager; her sister, Aine Lecky; and brother, Eoin Murphy.

“Dad is focused on the R&D side of the business; while myself, my sister and brother are involved in the day-to-day running.

There are six of us in the family; three are in the business, and three aren’t, so that brings balance. Once 5:00pm or 6:00pm comes, we try to switch off and talk about other things and the kids.

“With a three-year-old and a five-year-old, I have cut back on the amount of travelling I do for the moment, and Eoin has taken over a lot of that from me,” said Eibhlin.

Being a woman in the agribusiness sector is not an issue, she has found.

“The only comment that was ever made was from an older Welsh farmer, when I was working in England, who asked to speak to my boss.

A lot of women are totally involved in the running of farms now; farmers are used to that.

The sisters were the winners of the Anna May McHugh Female Leadership in Agriculture perpetual trophy in 2017.

The gong recognises the contribution of females within the Irish agri-business sector.

Meanwhile, back on the shop-floor, any out-sourcing of manufacturing that is done is carried out by Irish companies; Major doesn’t have any plans to look outside the country.

“We love what we are doing and we feel a responsibility to the small enough community we operate in. We obviously have to make a living; and the skills shortage is an issue; but out-sourcing to another country is not on the cards,” she concluded. 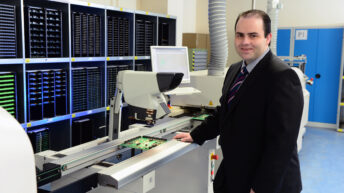