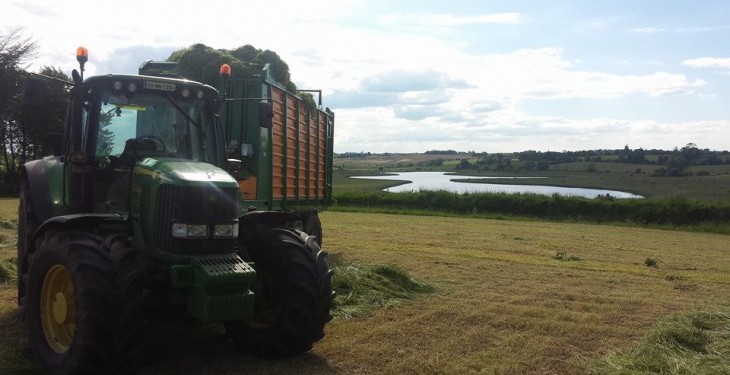 Silage contracting rates will in the range €110/ac to €140/ac for 2015, according to Co. Meath contractor Peter Farrelly.

“These rates include cutting, pick up and the ensiling of grass. Fees tend to come back that little bit the closer the contractor is to the border,” he said.

“We have already cut a fair acreage of grass this year. Yields are light but silage quality should be good. And it’s quality that farmers are focussing on, as many have a fair tonnage of silage still in the pit from last year.”

“And this has been the case for the past five years,” he said.

“Apart from spikes in fees at those times when fuel prices have risen, contractors’ rates have, invariably, come back to prior levels.

Commenting on the trends that are now apparent, in the context of the 2015 silage season, Murphy said that contractors have been busy in most parts of the country.

“Grass yields have been quite light. But this will be more than compensated for by the quality of the forage made,” he said.

Meanwhile, Roscommon contractor Des Hunt will be keeping his fees at 2014 levels for the upcoming silage season.

“Fuel prices have come back a little bit over the past number of months. But all of my machinery related costs have increased by 2% during the same period,” he said.

“One balances out the other and, as a result, I will be keeping my fees at last year’s levels for the season ahead.”

The Ballydaly-based man provides a silage, re-seeding and slurry contracting service to farmers in the mid-Roscommon area. His silage combo comprises four tractors – two John Deeres, a Lamborghini and a Same – plus a Malone forage wagon and a Taarup trailed harvester. A Guttler Greenmaster is used for direct re-seeding purposes.

Hunt expects the silage season to get underway in earnest towards the end of next week.

“I have two or three clients booked in for that time,” he said.

“But it all depends on the weather. We have had a fair bit of rain in the Roscommon area over the past few days. And it looks like we are due more of the same into the early part of next week.”