Up to 40mm of rain is likely today (Friday) and Met Eireann has issued a status yellow weather alert affecting Munster, Leinster and some northern counties.

Rain is to become persistent and occasionally heavy in Munster and Leinster but only showery outbreaks of rain will affect Connacht and Ulster, Met Eireann says.

The rain will die out in most areas on Friday evening and the weather alert is in place until midnight tonight Friday, it says.

Tomorrow (Saturday) Met Eireann says it will be mainly dry with sunny intervals, however isolated showers will develop for a time in the middle of the day.

Winds becoming light to moderate, west to southwest and feeling milder and there will be highest temperatures 11 to 14 degrees Celsius, Met Eireann says.

It says Saturday night will be mainly dry and clear, however cloud will increase later with outbreaks of rain and drizzle in the southwest and west.

Rain will become persistent Sunday morning in western counties and this will start to spread further east, Met Eireann says. Rain will reach the east of the country on Sunday evening but will die out in the west, it says.

Sunday will be a mild day but with fresh and gusty, southerly winds, it says. 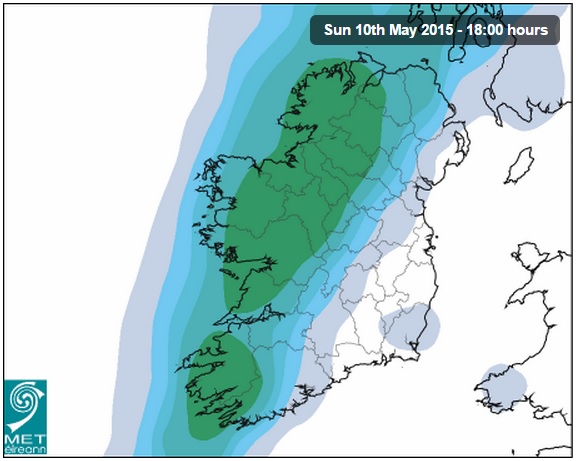 By Monday morning, rain will have died out in all parts of the country and the day itself will continue dry with cloud breaking, Met Eireann says.

South to southeast winds will moderate also and it will become very mild or even warm with the help of sunshine, it says.

Looking to Tuesday, Met Eireann says it will be another very mild or warm day but cloud will tend to increase at times and showers are likely to break out in places through the afternoon and evening, some heavy.

It says southerly winds will freshen as the day goes on and will veer westerly, fresh to strong, however, winds will moderate on Tuesday night and showers will mostly die out later.

Met Eireann is likely to start dry and bright but southerly winds will freshen again and a band of rain will sweep eastwards to affect all places during the evening.

Looking to Thursday, Met Eireann says we will see rain clearing to blustery showers but drier conditions may develop going in to next weekend.