Sheep trade: Factories working through backlog, as kill jumps by over 15,000 head

During the week ending Sunday, September 29, the number of spring lambs processed increased by 12,794 head and amounted to 56,339 head.

This week, Kildare Chilling (Monday quote) is offering a base price of 445c/kg +10c/kg QA (payable up to a carcass of 21kg).

Furthermore, Kepak Athleague (Monday quote) is offering a base price of 440c/kg + 15c/kg (payable up to a carcass of 21kg).

In addition, cast ewes are making 230-250c/kg in sheep processing plants (payable up to a carcass of 40kg).

Hogget supplies at Department of Agriculture approved sheep export plants stood at 212 head – an increase of 123 head – for the week ending September 29.

As referenced above, the number of spring lambs processed was 56,339 – an increase of 12,794 head on the previous week. 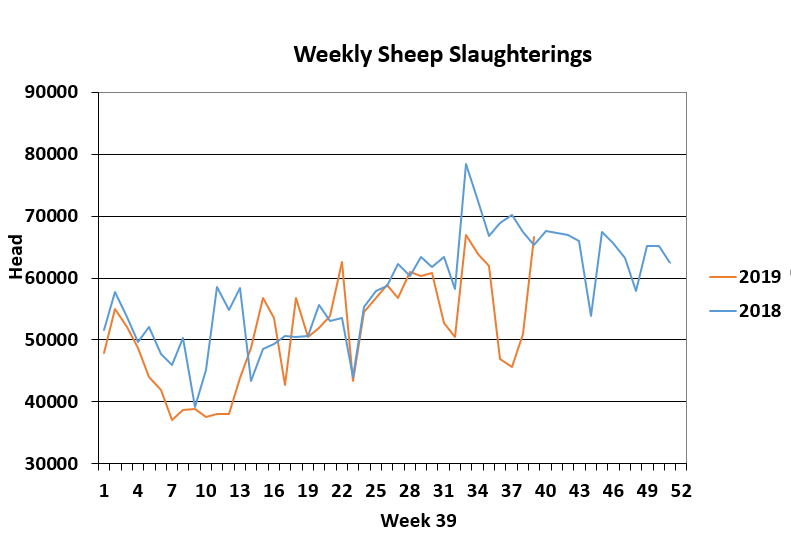 Graph source: Department of Agriculture, Food and the Marine

This week has seen quotes decrease by 5c/kg for lambs and up to 10c/kg for ewes.

Over the past week, the number of lambs killed increased by over 12,000 head. Furthermore, the continued backlog of lambs has put further pressure on prices.

This, in turn, has led to factories quoting a base price of 435c/kg for the first time in months.

“Farmers are absolutely furious at ongoing price cuts that are decimating their viability,” according to the Irish Cattle and Sheep Farmers’ Association’s (ICSA’s) sheep chairperson, Sean McNamara.

Furthermore, prices are significantly back from where we would expect them to be at this time of the year. This has been an ongoing issue since last autumn.

“We have been consistently making a loss of around €17/head and there is no way sheep farmers can sustain this,” Sean concluded.

'Imported lambs is the next big flashpoint' - ICSA