Sheep slaughterings rose an impressive 17% in April compared to the same month last year, according to the latest data from the Central Statistics Office (CSO).

However, the proportion of cattle and pigs slaughtered was down 1% and 9%, respectively, the figures published today, May 25, showed.

There was an increase in all cattle and sheep slaughterings for the first four months of the year at 4% and 13%, respectively (compared with the same period in 2016), while pig slaughtering fell 2%.

The carcass weights from the CSO refer to the animal’s cold body after being skinned, bled and eviscerated. 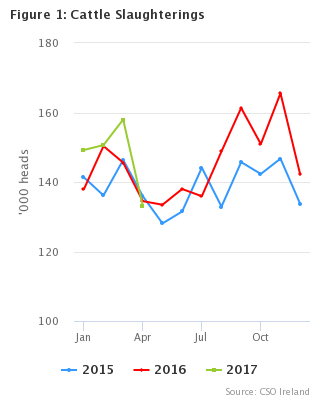 Last month, figures from the Livestock and Meat Commission revealed that 100,729 sheep from Northern Ireland had been slaughtered in southern plants in the first quarter of the year.

Still, Sheep Committee Chairman for the ICSA John Brooks warned that “every lamb” imported from Britain into Northern Ireland pushed “another Northern Irish lamb into the Republic”.

He said: “Greedy processors continue to substitute Irish lamb with cheap lamb, and lamb products, imported from the UK.

“This is a cynical tactic to keep a lid on the price paid out to farmers here.”