Just over 100,000 Northern Irish sheep have been slaughtered in southern plants so far this year, the latest figures from the Livestock and Meat Commission (LMC) show.

During the week ending April 8, some 5,876 NI-origin sheep were imported into the Republic of Ireland – a slight increase on number imported during the corresponding week in 2016.

Last week’s imports bring the total number of Northern Irish sheep crossing the border for direct slaughter in the Republic to 100,729.

But, during the past 15 weeks, Irish hogget prices have failed to match the returns generated during the same period in 2016.

And, just last week, Irish hogget finishers were being offered base quotes that were nearly 50c/kg lower than there 2016 equivalents.

“Greedy processors continue to substitute Irish lamb with cheap lamb, and lamb products, imported from the UK,” he said.

This is a cynical tactic to keep a lid on the price paid out to farmers here.

However, Brooks added that imports from Northern Ireland have long been a feature and they generally occur due to a lack of slaughtering capacity in the North.

“It’s a traditional trade; they haven’t the capacity in Northern Ireland to slaughter these sheep.

“But clarity is needed with regard to how this lamb is being labelled.

“Irish sheep farmers are proud of the fact that we can stand over our product, but there is a scare among farmers that Northern Irish lamb is being labelled as an Irish product.”

The Roscommon-based farmer added that the ICSA is totally opposed to imports from mainland UK coming into Northern Ireland.

“Every lamb that is imported from mainland UK to Northern Ireland pushes another Northern Irish lamb into the Republic,” he warned. 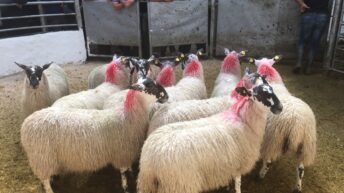