The sheep kill up to June 21 is over 10,000 head above the same 24 weeks as last year, the latest figures from the Department of Agriculture show.

Ewe and ram slaughterings are down 18% year on year, a result of farmers looking to rebuild the size of their breeding flock following falls in 2013 and 2014.

Meanwhile, according to the UK’s Agricultural and Horticultural Development Board (AHDB), Ireland remains the biggest competitor to the UK in the EU when it comes to sheepmeat exports to other Member States, with over two thirds of Irish sheepmeat being exported.

Ireland’s largest market for sheepmeat exports is France, with the UK its second largest destination for exports.

It says that the proportion of Irish lamb exported as cuts has continued to increase, in the first four months of 2015 up 1% to 78% of all trade, the rest being in the form of carcases. This compares to almost 40% of lamb being exported as cuts from the UK.

Irish production in 2015 as a whole is currently forecast to increase by 4% to 54,500t, despite a fall in the size of the breeding flock recorded in the Irish December survey. This increase comes as a result of an exceptionally good lambing season leading to higher numbers of lambs being born this spring. 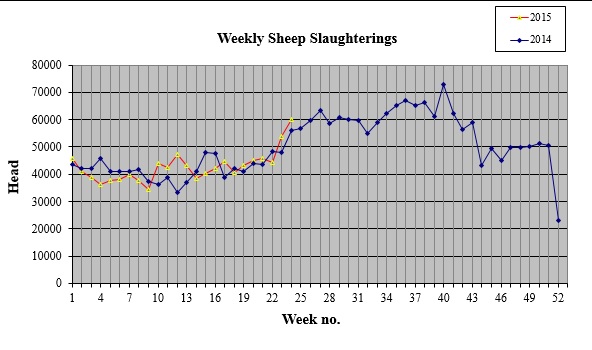