Weather conditions are set to become more changeable this week with showers of rain making a return, according to Met Éireann.

Today, Monday, July 15, is expected to remain mostly dry, with mist and fog patches clearing in the morning. Bright or sunny spells will then prevail, according to the national forecaster.

However, there will be a few scattered showers developing later in the day, mainly in Atlantic coastal counties.

Today will remain warm, with maximum temperatures of 20° to 24°, but a little cooler on some coasts, especially in the south and west.

Tonight will remain dry in many areas, but scattered outbreaks of showery rain will extend from the west, mainly affecting parts of Ulster, Connacht and west Munster. Minimum temperatures will range from 10° to 14°.

Tuesday will be mostly cloudy, with scattered outbreaks of showery rain, persistent in some areas.

However, Atlantic coastal areas will remain largely dry, with some bright or sunny spells. Temperatures will remain quite warm and humid reaching 18° to 23°.

Tuesday night will be dry in most areas, with clear spells and light to moderate southwesterly winds. However, outbreaks of showery rain will develop in Atlantic coastal counties by morning.

Wednesday will be cloudy, with outbreaks of rain extending eastwards across the country.

Rain will turn persistent at times, with some heavy bursts, especially in Atlantic coastal counties in the afternoon and early evening.

Thursday will be dry in many areas, with sunny spells, but some scattered showers will occur, mainly in Ulster, Connacht and west Munster.

Maximum temperatures will reach 16° to 21°, with warmest conditions in the east and south. Winds will be light to moderate, west to southwest in direction.

Finally, on Thursday night, a spell of more persistent rain will extend from the southwest, but the northern half of the country will remain largely dry until morning. 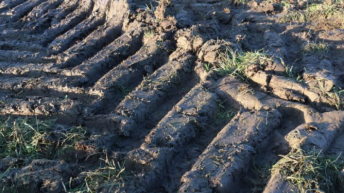 Soil compaction is a constant challenge on grassland farms