Rural crime and policing: Is the Garda Reserve the answer?

The issue of rural crime and policing could be solved with the “obvious” solution of increasing the Garda Reserve, according to one commentator.

Commenting on the matter, he said: “We are rather unusual in this country; we are certainly out of line with most of our European neighbours and with our neighbours across the channel in the next island and indeed with many communities in North America in that we’ve never used the resources within the community as a volunteer police force, except for a period during World War II.

But I think it would go a long way to giving the policing presence that people say they want in rural Ireland.

“But for some reason we seem to be opposed to it. And I was struck by the Oireachtas Committee on Justice.

“They produced a 96-page report looking at issues of rural crime and rural policing – and they never even mentioned the Garda Reserve.”

“There’s a town in the south of France; there’s a small contingent of police municipal, there; there’s also a gendarmerie post outside the town. In the wintertime the population is about 5,000 or 6,000. In the summertime it can swell to about 80,000.

In the evening you can see the police patrolling along in groups of three or four and you’ll maybe have five or six of these groups of police. You could have 20 police out on duty around the town. But when you look at them you realise they’re nearly all ‘auxiliary’; they’re volunteers.

“They are the postman, the butcher, the candlestick maker. And in the evening time they put on their uniform, they look the same as ordinary police.

“There will be one or two full-time police with them – but they give a terrific presence, visibility; they are well trained, they carry the same equipment and they have the same powers as the police.”

The former GSOC member noted that Garda associations were vigorously opposed to increasing the reserve when it was suggested in 2005, believing it would open the gates for policing on the “cheap”.

“There was no political will for it; I’m not quite sure why this is. Maybe it has something to do with the memories of the ‘special constabulary’ in Northern Ireland – but as I made the point in the piece, if we can have volunteers in our fire brigades, in our ambulances, in our coastguard ribs in our lifeboats – why can’t we have volunteers in our Garda cars?

“But it is a fairly obvious way I would think of giving the sort of towns that you and I would know around rural Ireland; giving them a police presence; giving them the sight of uniforms on the street – and these would be police officers from the community with amazingly good local knowledge that they would have.”

Brady suggested, for example in a midlands county, having 20 or 30 reservists on duty in the towns and villages along with two cars of regular full-time Gardaí.

They look the same, they have the same uniform, they use the same communication system – I think it could have an enormous transformational effect on the incidence of rural crime.

“Many towns and villages in England and Scotland and Wales at night; they’re patrolled by special constables, as they call them.”

Regarding concerns that criminals would “laugh” at regular Gardai, Brady noted that, in France, local police knew when to call in the “grown-up” police to deal with such individuals.

He concluded reiterating his call for the reserve to be given a chance. 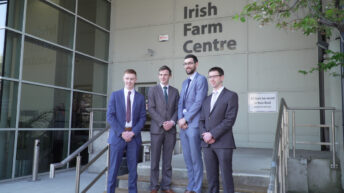 Macra elects president and vice-presidents for 2019-2021