Rugby stars reach for the milk in national dairy campaign 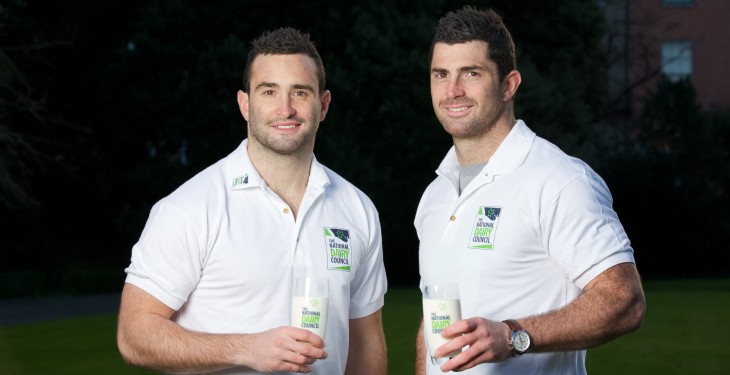 Professional Irish rugby icons Rob and Dave Kearney will line out as ambassadors to the National Dairy Council (NDC) in this, the 50th anniversary year of the NDC, it was announced this week.

The Kearneys are the latest Irish rugby stars to be capped for the NDC and follow in the footsteps of the highly successful television campaign with the legendary Paul O’Connell.

“The Kearney brothers are terrific role models who resonate with adults and children alike,” said NDC Chief Executive Zoë Kavanagh.   “They bring together an established and a rising star of Irish sports – and are collectively an embodiment of balanced diet and active lifestyle.”

Rob and Dave Kearney are both strong supporters of Irish farming and food production, having grown up on a farm on the Cooley Peninsula in Co Louth.  Their parents, David and Siobhan, are the fourth generation to continue to farm in this beautifully scenic location, surrounded by views of the sea out to the mountains.

A new television advertisement to promote Irish dairy will be filmed on the Kearney family farm after the Six Nations Championship and will be launched on the national airwaves to mark National Dairy Week in May.

Kavanagh said this year’s campaign rests within the ‘Irish Dairy: Sustainable and Nutritious by Nature’ strategy that is rooted in provenance, quality and the excellence of Ireland’s dairy produce.

The new advertising will set out to promote dairy as part of a healthy balanced diet and active lifestyle for all of the family.  It will show the goodness of our dairy based on quality pasture-based dairy farming. It will highlight that good nutrition starts with a balanced diet – including dairy – and that good eating habits start when you’re young.

The National Dairy Council also has a strong interest in promoting the positive role that milk can play in sports nutrition.

According to the NDC, research from Loughborough and Northumbria Universities demonstrate the potential effectiveness of skimmed milk as a re-hydration drink after exercise and the beneficial role milk and milk-based products may play in reducing exercise-induced muscle damage.

“We’re proud of our farming roots and recognise the amount of hard work that goes behind producing the type of good quality food we have come to expect in Ireland – Irish food deserves all the support it can get and we are both delighted to be working with the NDC in the months ahead,” said Rob Kearney.

“There is a growing interest in sports nutrition, in professional and amateur sport and the concept that how you fuel your body can affect your performance in training and in matches – whether you are playing a local school match – or as a professional sports person – it embodies the principals we apply in our every day life on and off the field,” said Dave Kearney.