The family informed, and entertained, thousands of viewers on the day-to-day workings of their farm, located in the highlands of county, where they milk 65 cows and also keep pheasants.

‘Big Week on the Farm’ also pitted celebrities against each other, and the clock, during the show’s hilarious ‘hand-milking competition’.

The show sought to educate the public about the realities of farm life; as well as providing entertainment.

Enda is currently in his final year at UCD studying agricultural science and hopes to some day come home to work on the farm full-time.

He became a member of Maudabawn Macra at 19, shortly after the club reformed – but says he wishes he had joined sooner. 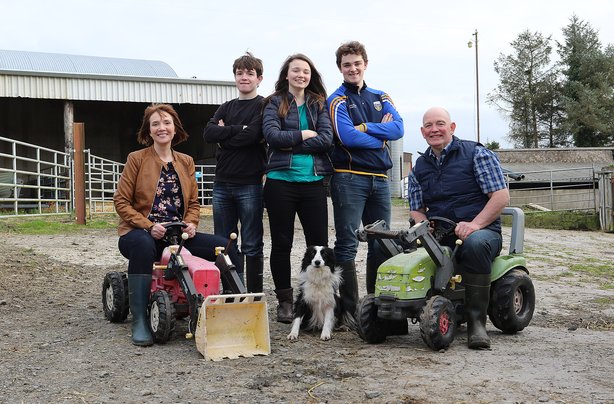 “I was told different stories about how great Macra was down through the years. The chance came up to join it – but I didn’t join it until after their recruitment night, which was a shindig in a house on the August bank holiday.

I went along and saw what they were doing and it just seemed like there was a great buzz and great craic to it – I really enjoyed it.

Enda signed up shortly after but didn’t realise he would be thrown into the deep-end of Macra life so soon. Shortly after he found himself singing a rendition of Derek Ryan’s ‘Hold on to Your Hat’, as part of a ballad group on stage at the National Talent Competition.

He has also enjoyed getting involved in the club’s sporting and charity events.

As part of a big breakfast fundraiser organised by the club, he managed to raise €2,600 for charity and even got to play at Croke Park.

Aside from featuring on ‘Big Week on the Farm’, Enda has plenty of other things to keep him busy.

He said: “I’d be at home at the weekends whenever I can and do my bit. I try and be as involved as I can; at certain times of the year the farm can be very busy.

There’s something different every day of the year. That’s the great thing about dairy farming in Ireland.

“I wanted to have an involvement in agriculture so I chose UCD ag science and I’ve loved it ever since. I’m able to come home at the weekends and put into practice what I’m learning during the week.

“Home is a fairly hectic schedule. If I’m not at college during the week, I might be home on the Thursday night, or Friday night, for a Macra meeting or home on the farm. I work in the local co-op as well; it’s very busy; but I love it.”

Enda won’t be home to celebrate his title for long, as he’s planning to jet off to Missouri, in the United States, for a three-month placement on a dairy farm run by Cork native Niall Murphy.