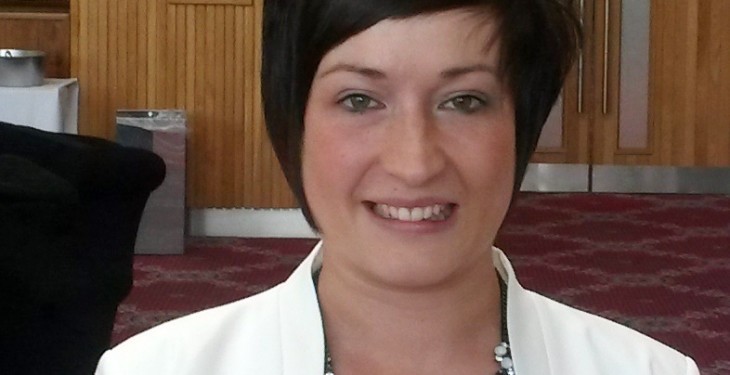 Roberta Simmons, from Rathfriland in Co. Down, is the new president of the Young Farmers’ Clubs of Ulster (YFCU).

She took over the position from her predecessor Martyn Blair at last weekend’s annual general meeting.

“I am really looking forward to the next two years,” she said.

“These are exciting times for the YFCU. Our membership is growing and, obviously, I want to build on this. It will also be important to further cement the role of the organisation as a key stakeholder group with the agri food sector.”

Looking ahead, Roberta identified the need for better education and training opportunities to be provided for young people growing up in rural areas.

“And, to this end, we will be liaising closely with the Department of Agriculture and the other bodies charged with the responsibility of delivering on this objective.

“Farming goes to the very heart of the economy in Northern Ireland and anything that can be done to allow farmers go about their businesses more effectively and efficiently will have a positive, knock-on effect right along the entire agri food chain.”

The new YFCU President will also act to ensure that the new CAP support measures deliver for young farmers on the ground.

“I would like to thank and commend Martyn Blair for the tremendous work he has put in over the past two years in delivering a young farmer support scheme that meets the specific needs of our industry here in Northern Ireland,” said Simmons.

“And, obviously, I want to build on this for the future. The European Commissioner for Agriculture Phil Hogan has already said that he wants to simplify the new CAP arrangements. And I can confirm that the YFCU will be taking an active part in this debate over the coming months.”

Another key objective for the new President will be to provide the means by which older members of the YFCU can remain actively involved within the organisation up to they are thirty years of age.

“We have agreed procedures which will extend the age at which members can participate in competitions from the current cut-off at 25 years of age up to 30,” she said.

“It is crucially important that we keep all of this experience within YFCU for as long as possible. I have been a member of the organisation for the past 15 years and have thoroughly enjoyed every minute of it.”