Brian Rohan pictured with his wife Norma and Brid Corkerey at the launch of Embrace Farm.

The Most Holy Rosary Catholic Church in Abbeyleix is the venue for this years ecumenical service.

The service is to remember the men, women and children who lost their lives in Ireland’s most dangerous working environment; the farm.

Embrace Farm was established to honour the memory of those who died and suffered serious injury in farm accidents and to support their next of kin.

Some 800 people are expected to attend the service and among those attending will be Minister for Agriculture Simon Coveney, former rugby player and farmer John Hayes, current Irish rugby international Sean O’Brien.

The event, which takes place at 2pm and is led by Embrace Farm founders Brian Rohan and his wife Norma, who launched the voluntary organisation last year in memory of Brian’s late father Liam who was killed following an accident on the family farm in Co. Laois in 2012. 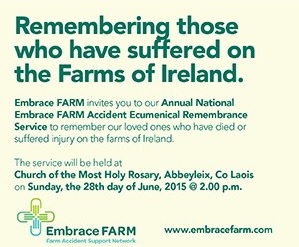 This year’s event comes following a dreadful year in 2014 for fatal farm accidents.

Some 30 people lost their lives in farm accidents during the year, an 87% increase on 2013, and a toll that triggered a major safety awareness campaign from Embrace Farm by way of its viral video campaign ‘What’s Left Behind’, the organisation says.

“We founded the organisation principally to provide support to families, like ours, who find themselves trying to deal with the death of a loved one on a family farm.

“The Remembrance Service enables people who have that tragic common experience to come together and share their sense of loss and, indeed, memory of their loved ones,” Brian Rohan said.

One of the high points of the service will be the reading out of names of people who died in farm accidents and Embrace Farm have asked that those who want their loved one’s names read out to contact them.