Recipe for success: Oiling the wheels of success 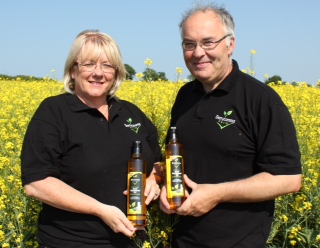 In a new series AgriLand has linked up with Bord Bia to showcase an agri-food business every Friday. This week AgriLand talks to Patrick Rooney of Derrycama Farm Rapseseed Oil about the benefits of rapeseed oil and his brave decision to embark on a new venture during the Recession.

In 2009 Derrycama Farm, based in Louth, carried free range poultry products and was pioneering eco-tillage methods on crops such as winter barley, wheat and oats. Farmer Patrick Rooney along with his wife Carol decided to try producing a value-added product rather than just growing crops onsite.

“We felt that rapeseed oil held the most potential as we already grew it each year and it was previously used as the raw material for pressing into culinary oil. By producing our range of natural products, using sustainable production methods together with total traceability from field to shop, we hope to build a loyal customer base. Using rapeseed oil as the main ingredient we also produce a range of dressings and infused oils. Every stage of the production process is completed on the farm,” noted Rooney.

In the past number of decades the Irish population has adapted more discerning tastes when it comes to cooking oils. The 1980s saw a bottle of ‘crisp n dry’ in every cupboard and by the 1990s olive oil was deemed a healthier alternative to vegetable oils. Rapeseed oil products are now starting to grow in popularity and Rooney advocates the health and practical benefits of using these products.

“Rapeseed oil contains half the saturated fat of olive oil and also has 10 times the Omega 3 level. Extra virgin olive oil will burn at 180 degrees leaving it unsuitable for high temperature cooking whereas rapeseed oil does not burn until 220 degrees. This makes it the perfect choice for all types of frying and roasting. Rapeseed oil is very versatile as it can be used to fry, to roast, to bake and drizzle,” detailed Rooney. He feels endorsement from celebrity chefs such as Nevin Maguire and Kevin Dundon have helped raise the profile of rapeseed.

“We attend Bloom every year and have exhibited at the National Crafts Fair in the past. When we started first we tended to do many small shows and markets in order to sell product. These markets/events are vital to artisan producers as they provide an ideal platform for producers to meet consumers. Unfortunately many of these markets have not survived, however where there is sufficient footfall they have, and provide small producers a direct channel to sell their wares,” reported Rooney.

The company is currently exploring the possibility of exporting to some European countries in order to decrease its dependence on the Irish market. With a growing number of rapeseed oils on the market Derrycama is keen to develop new and interesting products.

“We have expanded our product range to include dressings made with Derrycamma Farm Rapeseed Oil in order to appeal to a wider range of retailers and consumers,” noted Rooney.

2014 promises to be a busy year for Derrycama Farm. According to Castlebellingham-based farmer: “Our next big challenge in 2014 is to promote our new dressing range based on rapeseed oil. We have already tested our new range in selected retail outlets and are delighted with the reaction. The challenge is to get the new products tasted by as many people as possible in a cost-effective manner.”