Following an intense day of rain in most parts of the country on Friday, Met Eireann has issued two further rainfall warnings for today (Sunday) and tomorrow (Monday).

A ‘Status Orange’ rainfall warning has been issued for Kerry. Met Eireann forecasts heavy rain through Sunday and Monday with accumulations of 50-70mm possible.

Meanwhile, a ‘Status Yellow’ rainfall warning has been issued for Galway, Mayo, Clare, Cork and Limerick. Met Eireann says further heavy rain will fall in these areas through Sunday and Monday with accumulations of 30-50mm possible. 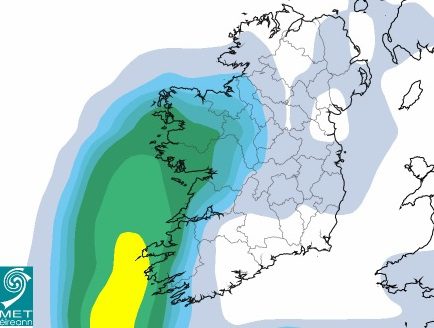 Met Eireann also says some areas will remain dry today but many parts will have outbreaks of rain. Some heavy downpours will occur with poor visibility and some surface flooding.

On Monday, Met Eireann says it will be mainly dry over Ulster but further heavy rain elsewhere with possible disruption in places.

A cool, breezy day is forecast with with highest temperatures only 12 to 14 degrees in fresh northerly winds.

The poor weather will create potentially hazardous conditions for road users. As such the RSA is advising drivers that: