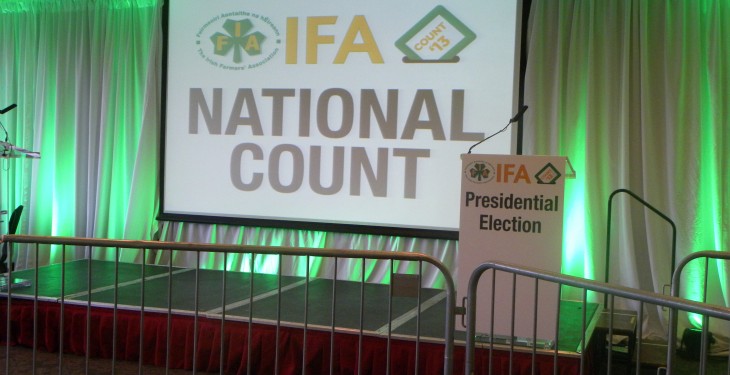 With just one week left to the closure for nominations for the role of IFA President we look at the field.

The IFA nomination system requires every candidate to secure the nomination of their own county and then the written backing of five other county chairmen.

With 29 county chairmen, this means that a maximum of four candidates can secure the required numbers and there are seven men currently in the race. The numbers simply don’t add up and at least three will not make it to the start line.

All nominations must be received by IFA HQ by close of play on Wednesday, January 6. With an Executive Council meeting the day before in Bluebell, it will make for an interesting day as candidates try secure the signatures they require.

Coupled with this, candidates may have to run the gauntlet of IFA grassroots members who are staging a protest outside IFA HQ on Wednesday, at what they say is the continued lack of listening by the IFA Executive to the organisation’s grassroots members.

Burns was visible during the beef protests of 2014, but his and the IFA’s performance for beef farmers last year may be called into question as could his lack of action on the vote of no confidence in Pat Smith last January.

He is considered by many to be in the strongest position at this point and is understood to have a number of experienced hands involved in his campaign.

A pig farmer from near Toomevara, Tipperary, Cullinan is not well known among the wider public and is keeping his campaign for backing close to the ground.

However, within IFA, Cullinan is highly respected and was brought in by IFA recently to review the IFA Pig DNA system along with Dr Paddy Wall.

While he’s held in high regard among the pigmen his lack of visibility outside the pig sector could be his achilles heel. Those close to Cullinan say he will secure enough backing to run, but whether they will give him enough clout remains to be seen.

Derek Deane needs little introduction to IFA members and non-members around the country. The Carlow man has been involved in IFA at a senior level for years. He is a former Deputy President and was the main whistleblower on the pay revelations that rocked IFA in November, which have led to this election.

Deane, if he can get the nominations for IFA President, would prove popular among many grassroots members but he might be seen as too radical by others in his quest for reform.

Joe Healy is a dark horse in the contest. His name was put forward at the Galway Co. Executive meeting recently, but he didn’t officially declare on the night.

But, one source close to Healy confirmed he will run. Healy would be seen by many as a younger, fresher option to voters and he also has pedigree, as a former Macra na Feirme President. However, since then he has steered clear of visible IFA involvement – which may or may not be a good thing for the Athenry man.

Kerry man Flor McCarthy is believed to be quietly confident of his chances of winning, if he runs. And that’s the big question – if he runs. One Kerry insider said he is unlikely to actually run, but that with the backing of Kerry in his pocket and at least two other promised signatures a slow decision on whether to run or not from Flor could determine the fate of others.

Flor was Kerry Co. Chairman from 2000 to 2004. Farming a beef and sheep farm in Kenmare, Flor has been involved in the Rural Development committee of IFA for the past number of years.

Cork dairy farmer Tim O’Leary was the first candidate to declare his intentions to run for the role of IFA President. Tim has held the role of Deputy President for the past two years, taking up the mantle of acting IFA President in the wake of Eddie Downey resigning on November 25.

However, he stepped back to the role of Deputy President on December 15 to allow Jer Bergin cover the duties of President as Chairman of the IFA. Some IFA sources say that O’Leary threw his hat into the ring too early in the aftermath of Downey’s resignation, which may affect his chances.

The Poultry Chairman in IFA announced his intentions to run for the role of IFA President just before Christmas. He secured the backing of his home county, Monaghan, and told Agriland that he stood for change.

Renaghan is probably the least known of the candidates, but should receive strong support from the northern IFA counties, but whether it will be enough to secure him five signatures remains to be seen.

The rules on electing a new IFA President are governed by the IFA Constitution and rules.

Under rule 74, the issue of the date is dealt with and that the National Treasurer/Returning Officer shall determine the date on which County Executives are to meet for the purpose of nominating candidates for the office of President.

A candidate for the office of IFA President must be a full-time farmer by occupation.

Each candidate who accepts a nomination for the office of President shall in confidence inform the National Treasurer/Returning Officer of any significant business, trade, professional or occupational interest which he holds outsideoffarming.

If, in the judgement of the National Treasurer/Returning Officer, a potential conflict of interests could reasonably arise, he shall disclose it to Council.

In the event of one person only being duly nominated for the office of IFA President the National Treasurer/Returning Officer shall without an election declare the said person elected for the ensuing term on the day on which nominations close.

Where more than one person is nominated for the office of IFA President a list of the candidates shall be issued to each Branch eligible to vote in the election.

The Branch shall vote by secret ballot on the list of candidates presented at the meeting.

All elections to the office of IFA President shall be conducted on the system of proportional representation by means of the single transferable vote.

If there are two or more candidates those entitled to vote shall by secret ballot express their preference for the candidate of their choice by number (e.g. one, two, three etc).

At the end of any count if the number of votes credited to a candidate is equal to or greater than the quota, that candidate shall be deemed to be elected.

Where no candidate exceeds the quota the candidate with the least number of first preferences shall be eliminated and the second preferences transferred to the remaining candidates.

In the event of equality of first preferences the names of the remaining candidates shall be placed in a draw and the preference determined by lot.