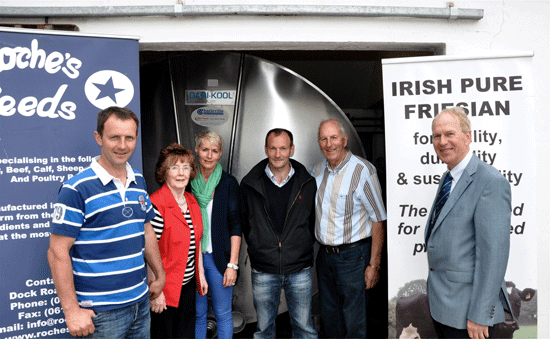 The Irish Pure Friesian Open Day 2013 will be held on the Ballykennedy herd of  brothers John and Michael O’ Connor in Ballingarry, Limerick this July.

Brothers John and Michael have built up the herd from the founding work of their father Mike Snr who established a milking herd on the farm in 1983. Two herds were amalgamated, with the milking herd currently at 150 cows. Average production in 2012 was 1,400 gallons, 4.25 per cent fat and 3.59 per cent protein. There is excellent use of grazed grass in the diet with 85 per cent of the herd calving in six weeks from mid-January.

Brothers John and Mike are members of the ‘Pathfinders’ discussion group. Tom O’Connor from Teagasc, Newcastlewest is the local Teagasc advisor.

“The attention to detail is a hallmark of this herd,” said the IHFA in a statement this afternoon.

“John’s dedication to better breeding has progressed the herd over the years.  The foundation for the current Ballykennedy herd was laid in the purchase of the ‘Leitrimeast’ herd and some exceptional cows from the ‘Kilsunny’ herd near Dovea.

“Further interesting additions to the herd include four females from the recently dispersed ‘Blackisle’ herd  in Scotland, stockbulls from the ‘Langley’ herd near London and ‘Castledale’ herd in Down. The ‘Lyselle’ family has also been added through embryo work which added a lot to the herd in terms of udder quality and milk solids. Older Friesian bloodlines have been followed where possible to bring dairyness and frame to the ‘Ballykennedy’ herd.

The IHFA added: “Progress in the performance of the herd has been aided by the adoption of milk recording, AI,  pedigree registration and herd classification service from IHFA. A recent classification inspection resulted in 11 EX, 29 VG, 15 GP and 3 Good conformation scores. Every year there is a good surplus of calved cows and heifers for sale. Bulls are attracting a lot of interest from surrounding dairy farmers. Some stockbulls from the herd have done exceptionally well for other breeders in both pedigree and commercial herds.”

The Open Day on 5th July at 12pm will consist of stockjudging and the opportunity to walk through this herd of top-quality Friesians. A number of trade stands will be on display. Refreshments will of course be served. The farm is located a short distance from Ballingarry village, just off the Newcastlewest/Kilmeedy road, approx 22kms from Charleville and 12kms from Adare.