Farmers may not be able to effectively protect their livestock if proposed changes to shooting and hunting laws are passed, according to Fianna Fail Senator Mark Daly.

As part of the proposed changes, no hunting or shooting would be permitted to take place between 12:00am and 6:00am, from September 1 to March 31; this curfew would also be written on the licence.

The only exceptions to this rule would be if an actual dog attack occurred or if a person held a Section 42 licence; a licence for permission to control protected wild birds or protected wild animals that are causing serious damage.

Meanwhile, during all other darkness hours (other than the curfew times stated above) hunters and shooters would have to notify the landowner of their starting and finishing time before commencing, under the proposed new rules.

Hunters and shooters would also be required to inform their local Garda station, or nearest station which is open around the clock, prior to commencement of shooting during hours of darkness.

These proposed changes would relate to all hunting and shooting, with either a shotgun or a rifle, if they are given the go ahead.

Speaking to Radio Kerry, Senator Daly described the proposed changes in legislation as ‘not very practical‘; if the proposals were to be passed they could have a significant economic impact for farmers, he added.

If we cannot cull the fox numbers in the county it means that more lambs and sheep will be attacked and killed, and farmers will be at a loss.

“The intention is good and they say it is about health and safety; but the real issue here is will it allow farmers to effectively manage their livestock and to protect their livestock against attacks by foxes?

“My belief is that it will not,” Senator Daly said.

By imposing this ban, fox numbers will increase to the detriment of ground resting birds, domestic poultry and lambs, according to Seamus Heraty, a Predator Control Officer with the National Association of Regional Games Councils.

Some of Ireland’s ground resting birds could be severely impacted by increased predation by foxes, at a time when their numbers are at an all-time low, Heraty said.

This comes at a time when the tax payer is paying millions through GLAS schemes for farmers, and through funding to the National Parks and Wildlife Services (NPWS), to protect these birds, he added.

From my own experience, and talking with other gun club members from around the country, 90% of foxes shot at night are shot in the proposed curfew period.

“Shooting at night is a safe and effective way of predator control; it has been carried out by gun clubs, in conjunction with the farmers whose lands they shoot over, for the past 50 years or more,” he said. 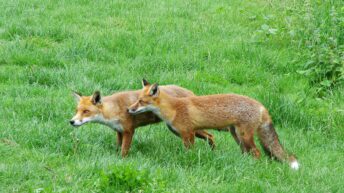