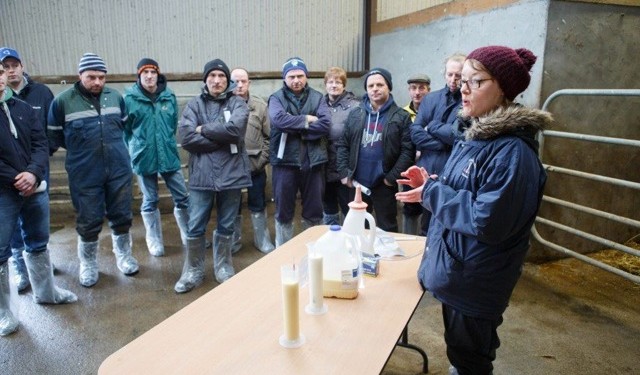 With calving on farms throughout the country in full swing. It is important to emphasise the huge role that proper colostrum management plays in the rearing of healthy calves.

AgriLand spoke to Muireann Conneely of Teagasc on this crucial element of calf management.

“Everybody at this stage knows the importance of colostrum. It is extremely important,” she said.

She reiterated that at birth, a calf has a poorly developed immune system. There is no transfer of antibodies from the cow to the calf during pregnancy. Because of this the calf has to be fed first milking colostrum which is rich in antibodies that provide protection from diseases during its early life until the immune system of the calf becomes functional.

She emphasised three key steps for farmers to ensure they are getting this crucial area right.

Firstly farmers should only use the first milking. Conneely outlined research has shown that only colostrum from the first milking post-calving is suitable for feeding to calves as their first feed as the quality of the colostrum halves between the first and second milking.

She highlighted during the research the colostrum collected from cows that had calved more than 15 hours before milking was of poor quality. Results from the experiment indicate that colostrum quality is maximised when cows are milked within six hours of calving.

She said: “This suggests that best practice is to milk the cow as soon as possible after calving.”

Secondly, she said the second step is to ensure to feed the calf within two hours of being born and that this can be critical as the calf’s ability to absorb is lessened as the hours pass.

Finally the third step is to give three litres to your average 40 kg calf, she advised.

Conneely also noted that colostrum from heifers (first lactation animals) is of poorer quality than colostrum obtained from older cows (second lactation upwards). She suggested “this may be because older cows have been exposed to more diseases and thus there colostrum will have higher immunity”.

However she noted “colostrum quality is generally still pretty high in heifers”.

Conneely also noted research has shown that colostrum quality is lowered when the dry period is less than eight weeks and greater than 16 weeks. Thus she noted that having a dry period between eight and 16 weeks appears to improve colostrum quality.

She also added that higher yielding cows also tend to have poorer quality colostrum due to the dilution of immunoglobulins.

In conclusion, Conneely commented: “The ideal situation is that every calf would get colostrum from its own mother. However this is not always practical in busy herds. If this is not possible farmers should feed the calf colostrum from one other cow. Preferably an older cow that is disease free. Pooling colostrum is a sure fire way of spreading disease.”