The price paid for farms of over 50 acres (21ha) fell slightly in 2013, according to the latest land figures from Teagasc and the Society of Chartered Surveyors Ireland.

In contrast to the smaller land transactions (up to 50 acres), price movements were negative in 2013, with the biggest percentage drop occurring in the case of larger (over 100 acres/42ha) sales in the Connaught/Ulster region.

Munster and the rest of Leinster also saw land price reductions in 2013 for medium and larger sized transactions without a residential holding with entitlements, but the decreases were less pronounced than in the case of Connaught/Ulster, it found.

“There has been good demand for 150+ acre farms over the last 12-18 months. The sale of 30-50 acre farms depends on local conditions and the strength of the farmers in the immediate locality,” according to Trevor McCarthy, SCSI Rural Professional Group Chair, Munster region.

The transactions show a broadly similar trend of increasing prices in the case of Munster and the rest of Leinster, has found in the case of sales that included entitlements. However, in the case of Connaught/Ulster land sales prices involving a residential holding were relatively unchanged in 2013 in the previous year.

For land without entitlements, respondents noted an increase of similar levels in the Leinster and Munster regions. However, prices in Connaught/Ulster region remained stable or decreased marginally.

Prices for non-residential land without entitlements in Leinster were, by and large, the highest in 2013 in comparison to other regions. However, members recorded slight falls in prices in Connaught/Ulster. The full report can be found here. 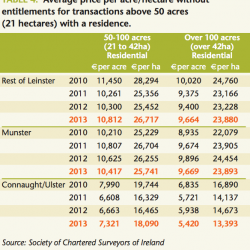 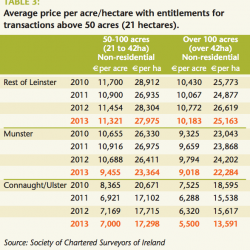