Post-calving trace mineral deficiency is a reality: How to get cows on farm back in calf

Manganese (Mn) deficiency will result in impaired ovulation (Wilson, 1952) and a deficiency in selenium (Se) can lead to cystic ovaries and erratic, weak or silent heat periods (Hostetler et al., 2003).

Supplementing with injectable trace minerals in the pre-breeding period could improve fertility in your herd by rapidly raising trace mineral stores, which could help to ensure a compact-calving pattern.

One of the key performance indicators for dairy herd performance and a major determining factor for farm profitability is a compact-calving pattern.

Poor fertility is still a major issue on Irish farms and can result in substantial losses at farm level. Teagasc research, for instance, has estimated that poor fertility in an Irish herd is costing €100/cow in the herd.

Trace minerals are a vital component of bovine nutrition and trace mineral imbalances have been linked with poor fertility in Irish dairy herds.

The transition period can be extremely challenging for the dairy cow, and oral minerals alone may not be enough to ensure your cattle are in optimal mineral status for peak fertility. 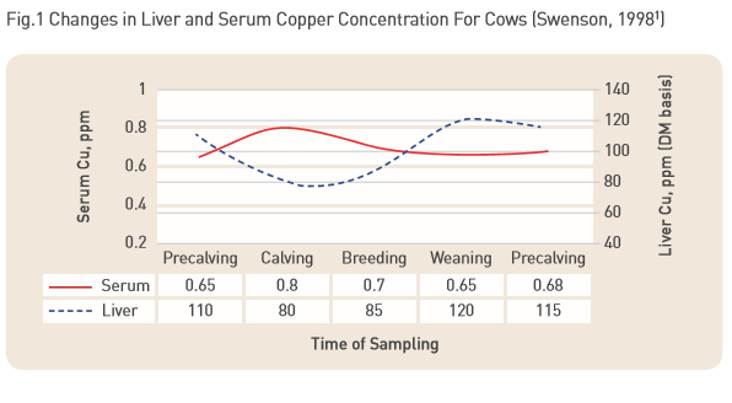 The trace mineral levels in cattle are not static; they change throughout the production cycle depending on the demands on the animal.

Swenson 1998 (Figure 1) showed the natural decline in the trace mineral status of cows in the last trimester of pregnancy as there is an increasing demand for trace minerals for foetal development.

For example, cows having adequate liver copper (Cu) stores pre-calving became marginal by the time of parturition. In the pre-calving period, even cows on well-fed or orally supplemented cows can become mineral depleted due to the growing unborn calf.

The foetus will increase in weight by 50% in the third trimester and during this period the bulk of the trace mineral transfer to the calf will occur (Hall., 2006).

Even well-fed transition cows can deplete their own mineral reserves transferring minerals to the growing unborn calf.

During the transition period, from late pregnancy to early lactation, mineral requirement that is needed for foetal growth and milk synthesis increases dramatically, exceeding the amount the cow can obtain from dietary sources, but this issue is further exacerbated by falling intake levels (Figure 2).

Prior to, and following calving, there is a natural fall in oral intake levels (usually decreased 30-35% during the final three weeks prepartum) which means even in well-fed (orally supplemented) cows, post-calving can be in a sub-clinical deficient mineral status (Grummer., 1995).

Thus, oral nutrition alone might not be enough to ensure cows have the adequate minerals to go back in calf quickly.

Getting heifers back in calf can be particularly difficult following calving. In their first lactation, heifers are recovering from their first calving, commencing lactation, trying to conceive once again, and all this while they are still growing.

As a result, heifers can suffer reduced fertility from deficiency due to the increased demand for minerals.

Despite the widespread use of oral mineral supplementation, oral trace minerals are poorly absorbed by cattle.

Depending on the source of the mineral, the level of absorption varies greatly. Oral supplementation alone can take weeks to raise the mineral stores of cattle, which may lead to a prolonged calving interval and repeat services. 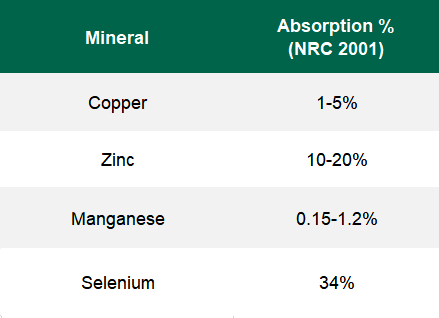 In the graph below (Figure 3) you can see how increased forage levels of Sulphur (S) and Molybdenum (Mo) greatly depleted the copper (Cu) absorption. All oral minerals are subject to the harsh rumen environment, so the mineral levels in the feed will not match the mineral levels being absorbed by the cow. 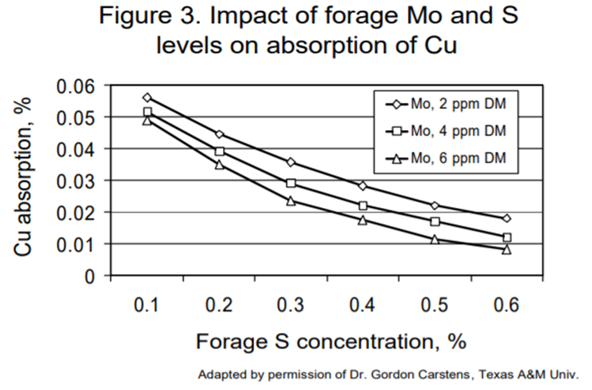 Oral mineral nutrition is essential for the maintenance diet of cattle, but at critical phases of production like pre-breeding, the challenges of increased demand, variable oral intake, rumen antagonism and poor absorption of oral minerals, oral nutrition alone might not be enough to ensure your cattle have an adequate trace mineral status to ensure your herd meets the target for a compact-calving interval.

Pre-breeding supplementation helps to raise not only the trace minerals, but also the essential enzyme levels in cows rapidly and effectively, which could drastically assist farmers to get cows and heifers back in calf in a tighter-calving pattern.

Several studies from leading US universities have researched the potential benefits of injectable trace mineral supplementation in cows in the pre-breeding period, with improvements in overall pregnancy and improved calving distribution (Mundell et al, 2012).

Ask your vet how a trace mineral injection could help get your cows back in calf quickly.