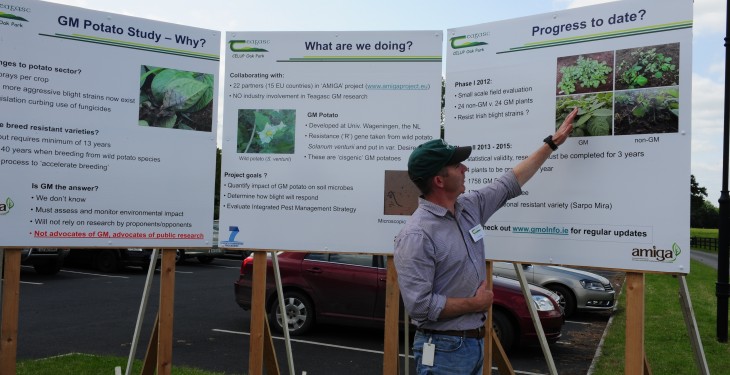 Ireland’s genetically modified (GM) potato trials have showed a strong resistance to late blight but it is too early to say if it is a viable option for Irish agriculture.

This is according to Dr Ewen Mullins of Teagasc, who was speaking at today’s National Potato Conference in Dublin. “Based on the first year’s data, the GM potato has demonstrated robust resistance to late blight but the durability of this resistance against Irish blight has yet to be determined and will be monitored through the remainder of the study,” the senior research officer explained.

The Teagasc three-year research is investigating whether there are long-term impacts associated with this specific GM crop and, critically, gauge how the late blight disease itself responds. Significantly, this is not just a question being asked in Ireland: the same issues are arising across Europe.

The conference heard more than six million potatoes are grown in the EU every year and blight costs of control and drainage in the region are estimated to be a whopping €100m. In Ireland, the net worth of the potato sector is up to €250m, while fungicides cost €800/ha.

Ireland’s first GM experiment was completed last year and, Dr Mullins explained plans are now at an advanced stage for a repeat study in 2014.

“It is important to point out that Teagasc is not producing GM late blight resistant potatoes for production or commercial purposes and neither are we advocates got the ag-biotech companies,” he stressed in his presentation.

“Our role is to investigate the potential negative and/or positive impacts GM technology in regard to this specific GM variety and then inform stakeholders and the general public as to conclusions drawn based on an Irish specific research study.”

Last year more than 1,000 people visiting Oak Park to see and hear about the GM research from Teagasc staff. The three-year field programme will be completed in 2016, where the full results are expected to be scientifically published. More information is available on www.gmoinfo.ie.